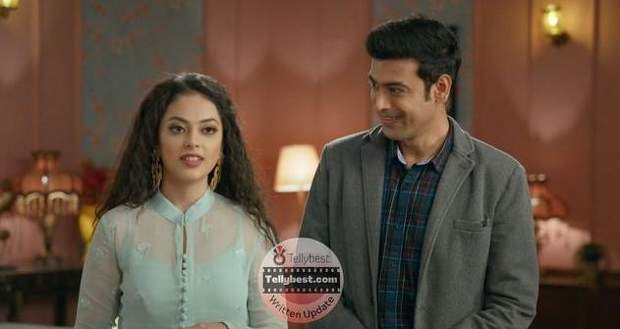 Today's Imlie 4th January 2023 episode starts with Atharva promising Imlie that he will not let the habit of drinking alcohol get over his whole life.

Imlie jokes that she has gotten addicted while telling Atharva that it was wrong of them to drink in public.

He apologizes as he tells them that if he has known, he would have sent the police earlier while Cheeni boasts that he helped by using his connections to get to talk to them and the accident did not become a big thing.

Imlie thanks Abhi for helping them while Cheeni says that she is the one who saw them first and informed Abhi about it.

However, Imlie mocks her and thanks Abhi once again which angers Cheeni.

Cheeni leaves while Atharva tells Abhi that he and Imlie will handle the situation from now on.

Abhi nods and leaves while Imlie looks at his retreating figure.

Back at the Rathod house, Rupy and Arpita get shocked while Sundar comes there and tells them that he is sure they are getting the video wrong.

Meanwhile, Imlie and Atharva return home while Devika rushes to hug both of them.

Atharva points out Imlie's injury while Shivani brings Imlie's luggage to the front and tells her to get out of the house.

However, Atharva defends Imlie by saying that he is alive today because of her and that he has also made a promise to not even touch alcohol from now on.

Shivani again comments on Imlie's character and says that a girl like her is not allowed to stay in this house.

Atharva once again defends Imlie and states that he was the one who challenged Imlie to drink and that he should get out of the house too since he drinks alcohol the most.

Further, Atharva brings his bags downstairs while Devika scolds him.

Devika hugs her children while they see Imlie's family come and greet them.

Rupy talks about seeing the video while Rudra informs them that Imlie has solved the situation already.

They joke while Imlie sits with her family and talks about her new project.

On the other hand, Abhi praises Imlie while Cheeni gets jealous and tells him that he should praise her instead of Imlie.

Abhi realizes that Cheeni is jealous and jokingly pushes her buttons even more by praising Imlie.

As the car stops, Cheeni gets out angrily and leaves while Abhi sits laughing in his seat.

Back at the Rana house, Imlie talks to Sr. Imlie's photo and prays for strength while she starts writing for her project on the computer.

Meanwhile, Keya and Akash see Imlie on her computer and get shocked.

At the same time, Atharva tries to distract himself with music but fails as he takes his phone and calls Cheeni.

Cheeni sees the call and disconnects while he continues calling her.

Cheeni finally attends the call and talks sweetly to Atharva who keeps on begging her to get back together.

Imlie comes there and takes the call from him as she hears Cheeni saying that he should compromise with Imlie.

Imlie asks Cheeni if Abhi knows about her history with Atharva and disconnects the call while stating that she will ask Abhi herself.

Atharva and Imlie start arguing while the Rana family hears their commotion through the halls.