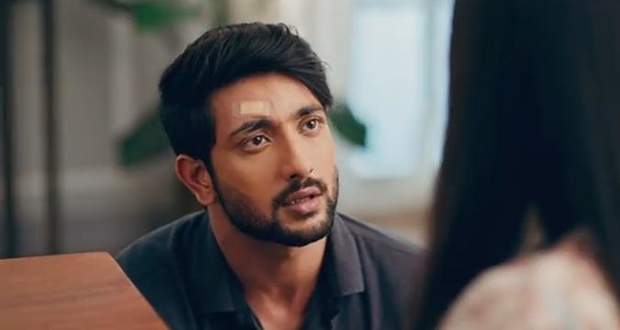 Today's Imlie 4th July 2022 episode starts with Aryan thinks that he will have to find out the name of the person who kidnapped him and forms a plan.

Afterward, Aryan manages to kick one goon while he is distracted and skillfully senses the other goon's locations while being blindfolded.

While continuing his fight, Aryan manages to untie himself and remove the blindfold.

Aryan demands to know the person who wants him kidnapped when suddenly a goon hits him in the head with a glass bottle.

Due to the impact, Aryan falls unconscious while the goon gets scolded for hurting Aryan as it will lower his price.

Later, Jyoti scolds the goon for hurting Aryan while the goon demands 5 crores as random instead of the decided 5 lacs.

Jyoti gets worried as she doesn't have the money and hopes that Imlie forms a plan to save Aryan.

Elsewhere, Harry brings Imlie to the bar where Aryan is being held captive to help her.

Jyoti breaks a glass vase in anger and Narmada comes to check on her hearing the sound.

Jyoti further searches for Harry with the plan to get 5 crores from him and gets frustrated when she learns that Harry is not in his room.

However, Jyoti gets another idea and calls the police and informs them about Aryan being kidnapped.

Back at the bar, Imlie and Harry see Aryan from a window and try to communicate with him but fail as Aryan doesn't give any response.

The goons come there and Aryan still doesn't make any movements making Imlie and Harry realize that he is put on sedatives.

Back at the Rathore house, Jyoti talks to the police and tells the police that the main suspect is Keri as she is not found anywhere.

Neela and Gudiya also support this suspicion after which the police find the family jewelry from Keri's items which Jyoti had secretly planted there.

Back at the bar, Imlie dons the disguise of Keri and manages to get inside the bar.

At the same time, the goons see the news about Aryan's kidnapping and think to kill him before they get caught.

Keri notices the anxious behavior of the goons and follows them to get to Aryan.