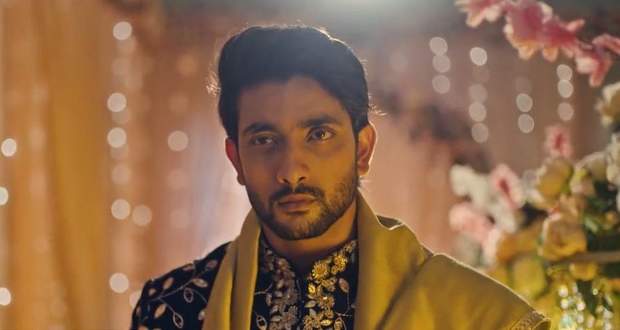 Today's Imlie 4th May 2022 episode starts with Aryan getting emotional and asking Arpita why she has to leave her house after marriage and starts blabbering.

However, Arpita hugs Aryan out of happiness and tells him that she won't forget him.

Aryan holds Imlie's hand to thank her while she also smiles.

Meanwhile, Narmada arranges the things asked for dowry and tells Nanda who asks her to check if everything is there.

With a quivering voice, Narmada recites the list and tells the servants to deliver everything to Sundar's new house.

Nanda happily tells her that now she will bring Sundar Tilak.

Imlie comes there and asks them what they discussing but Narmada lies to her and leave.

Imlie thinks that there is something fishy going on.

Aryan asks her if she's okay and argues with her while the priest asks Imlie to do the Gathbandhan.

Further, Imlie goes to stand near Nanda and tells her that she has called the police to arrest her.

Nanda freaks out and loudly tells her to take back the items she took for dowry in front of everyone.

Imlie tells Nanda and Neela that their truth is exposed to everyone.

Taking the opportunity of the situation, Gudiya instigates Narmada who tries to stop Imlie from speaking further.

Imlie tells everyone about what she has seen happen to the families due to arranging Dowry.

Nanda tells Sundar to walk away from the marriage but he refuses to do so.

Imlie says that she has a solution and takes everyone to a giant weighing machine.

Imlie says that Arpita will sit on one side and the dowry will be put on the other side.

Nanda will take to take home whichever has more weight.

Nanda immediately accepts the condition thinking that she will take the Dowry home.

However, the weighting doesn't flinch even after putting everything in Dowry on the other side and shows Arpita's weight more.

Imlie says that Nanda will have to take Arpita home now when Neela comes forwards and flings the cardboard boxes revealing that they are empty.

To download Imli all episodes or watch Imlie today's (4 May 2022) latest full episode, go to hotstar.com

© Copyright tellybest.com, 2022, 2023. All Rights Reserved. Unauthorized use and/or duplication of any material from tellybest.com without written permission is strictly prohibited.
Cached Saved on: Wednesday 25th of January 2023 06:25:33 PMCached Disp on: Sunday 5th of February 2023 12:53:04 PM