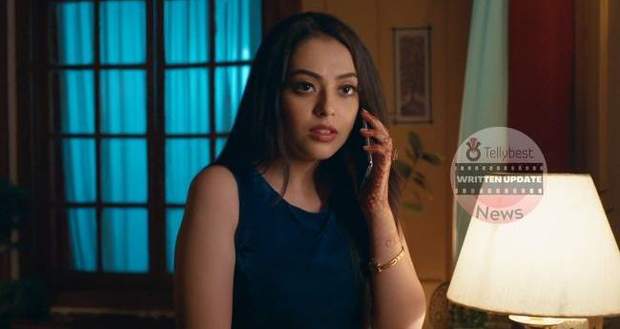 Today's Imlie 4th November 2022 episode starts with Imlie realizing that the support system in the hospital is not working and trying to fix it.

However, she is unable to do so as she panics and tells the family members that she does not know how to fix the machine.

Further, Imlie recalls how Atharva saved her and calls one of the family members to talk to the doctor.

The doctor gives instructions to Imlie and tells her what to do while Kyra says that lmlie can harm Atharva since she doesn't know anything.

Further, a man comes there with a computer and manages to open the door while the doctors rush to check on Atharva.

Rupy goes to stand beside Cheeni and tells her to see how all her plans are bringing Atharva and Imlie closer only.

The doctors say that Atharva is stable while telling the family members to let him rest.

Later, Atharva's parents praise Imlie for saving her while Divya again says that Imlie is the reason Atharva is at the hospital.

The family returns home and Shivani and Divya keep talking about Imlie degradingly.

However, Devika stands up for Imlie and states that it is time for Imlie's First Rasoi ritual.

On the other hand, Atharva keeps calling Cheeni who is talking to Jatin, and orders him to delete all the CCTV footage from the accident area.

Further, Cheeni talks to Atharva and acts as if she was helpless at the hospital and could not go to support him in front of anyone.

However, Devika comes there just then and Atharva disconnects the call.

Devika tells Atharva that he is busy chasing after Cheeni while Imlie did so many things to save him.

Atharva gets shocked to hear all the things that Imlie did for him.

On the other hand, Shivani tells Imlie to leave Halwa and make only Dal-Roti as Atharva has just come back from the hospital.

Imlie feels stuck and calls Sundar asking him for advice.

However, Sundar and Arpita tease her and tells her to make the thing that only she and her mother used to make.

Imlie gets happy as she starts making Moti Roti which her mother Imlie used to make.

Further, Imlie serves the food while Atharva argues that he only wants to drink juice.

Devika tells Atharva that he has to eat to take his medicines.

Atharva lifts the Moti Roti and asks Imlie what is it in a condescending tone.

© Copyright tellybest.com, 2022, 2023. All Rights Reserved. Unauthorized use and/or duplication of any material from tellybest.com without written permission is strictly prohibited.
Cached Saved on: Monday 21st of November 2022 02:17:25 AMCached Disp on: Wednesday 7th of December 2022 04:42:08 PM