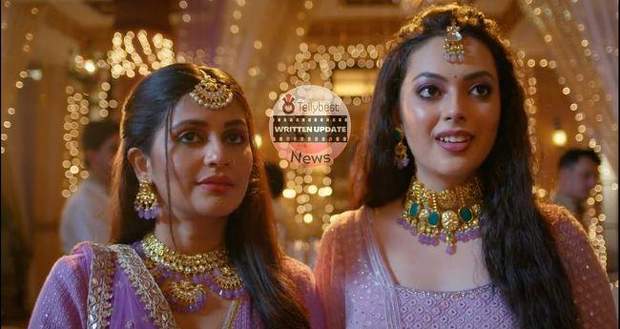 Today's Imlie 4th October 2022 episode starts with Cheeni going to find the Rana family and hiding behind a pillar when she hears Atharva's voice.

He says he will marry Imlie if she agrees to marry him even after knowing the truth.

Meanwhile, Cheeni is confused and Atharva goes to talk to Imlie while his family calls his name continuously to stop him.

Afterwards, Kia puts her hand on Cheeni’s shoulder and taunts her for breaking the vase and eavesdropping on Rana’s conversation.

Near the temple, Atharva crashes into dangling flower lines and he pulls one line down and throws it on the floor.

The garland catches fire from the lighted diya’s and Imlie pull the garland out of Atharva’s way so his feet do not get burnt.

However, her hand get burned by fire as she taps the garland with her hand trying to stop the fire and her family gathers near her when they hear her loud cry.

However, she hides her hand behind her back and says she’s okay and starts the arti.

Meanwhile, Atharva is not able to gather the courage to tell Imlie the truth so he types a text that he loves Cheeni and his father mistakenly chose her and requests her to tell her sister about his love.

He also tells her he will wait for Cheeni to wear the yellow saree kept near the temple if she wants to marry him.

At the same time, Cheeni sees him putting the box behind the temple and picks it up and thinks it is for Imlie so she decides to keep it.

After the aarti is finished, Imlie is about to check Atharva’s message but Rudra calls her and praises her voice and says she purified Rana's house with her aarti.

Later, a waiter accidentally drops a drink on Imlie’s dress and Kia takes her to change her clothes.

However, Narmada asks Rudra about the reason for stalling the engagement and he is about to tell the truth to everyone but Atharva enters the hall.

At the same time, Cheeni comes down wearing the yellow saree and he gets happy as he thinks she agreed to marry him.

However, Imlie also comes down but the light goes off and the bride stands in front of him.

The engagement is conducted in the darkness and Atharva puts the ring on Imlie thinking she’s Cheeni.

The electricity comes back, he gets shocked while Kia and Akash recall seeing Atharva’s text and putting the phone in a kalash filled with water.

Kia snatches the saree from Cheeni while Akash switches off the house’s electricity.

After the engagement, Imlie asks Atharva if he’s okay as his eyes are filled with tears but his parents assure her as they think he has changed his mind and has decided to marry her.

© Copyright tellybest.com, 2022, 2023. All Rights Reserved. Unauthorized use and/or duplication of any material from tellybest.com without written permission is strictly prohibited.
Cached Saved on: Monday 21st of November 2022 12:49:07 AMCached Disp on: Wednesday 7th of December 2022 03:40:06 PM