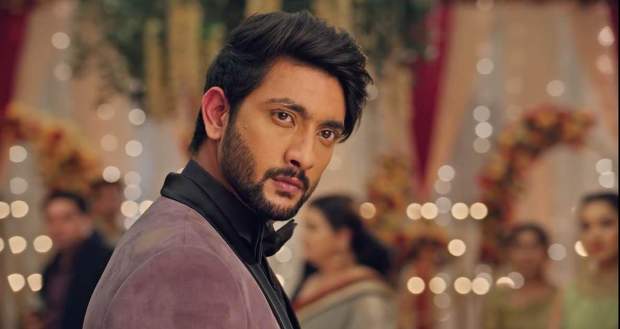 Imlie states about their deal to free Aditya from false accusations but Aryan reminds her that he gave choices to her(about the marriage) and not Aditya.

He gets annoyed with her and walks away out of the house furiously.

While driving his car, Aryan gets distracted thinking about Imlie's request to stop seeking revenge against, Aditya.

Suddenly, a man appears in front of Aryan's car. He freaks out and is met with an accident.

The blood oozes out from Aryan's head while he gets out of the car and loses his consciousness.

Meanwhile, Narmada and Arpita are in the hospital. Narmada is worried about him and his carelessness.

Arpita tells that Aryan's behavioral change is because of Arvind's death.

At the same time, Neela's annoying voice of fake concern echoes in the hospital. She blames Imlie for Aryan's injury while Narmada asks her to stay silent.

Gudiya shows up with a pooja plate and states that nothing will happen to her Ary baby (Aryan).

However, the doctor informs that Aryan's injuries have been treated and he is out of danger.

Imlie asks Arpita to return home and to take care of Narmada. Gudiya tries to stay in the hospital but Narmada stops her.

Imlie walks towards sleeping Aryan and rants to reconsider the revenge. She states that she will never let Rathod's to lose another son.

Later, Aryan wakes up to see Imlie sleeping on the couch.

He caresses her hair admiring her while massaging her forehead.

Imlie wakes up and misunderstands him and blames him for teasing her.

Both of them stare at each other intently for a while and get back to their bickering.

Later, Neela stops Imlie and asks where she is headed. Imlie makes fun of Neela.

Elsewhere, Narmada tries to convince Aryan to let go of his revenge and take care of his marriage.

Imlie informs Aparna about Aryan and asks about a recipe for cooking.

Aditya grabs the phone from Aparna to vent his anger and disconnect the call.