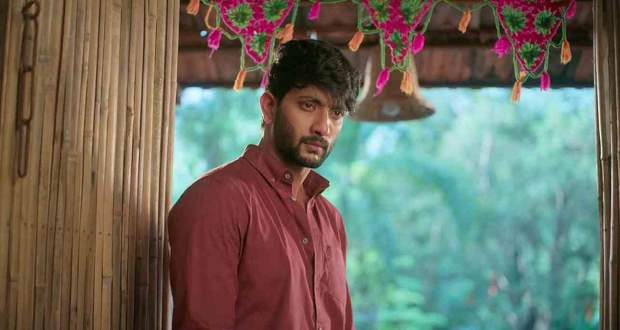 Today's Imlie 5th August 2022 episode starts with the shopkeeper throwing Cheeni into the air while Aryan comes there at the right time and saves her.

Aryan glares at the shopkeeper while Imlie feels grateful and rushes to Cheeni.

Cheeni tells the shopkeepers that they won't be good for long while Aryan asks her who tried to harm her.

The main shopkeeper tries to threaten Aryan while Aryan hits him with a punch and throws him into the shop.

Further, Aryan insults the shopkeeper and further manages to build a shop in Cheeni's name in half an hour.

Cheeni gets happy seeing the shop but Imlie refuses to let Cheeni get anything from the shop.

Imlie slips and falls into Aryan's hands as she scolds him for trying to manipulate Cheeni into taking his side.

At the same time, Chini sees them and thinks to bring them together while she will fight off the villains.

Just then, Malini arrives there shocking Imlie and Aryan.

Cheeni stops Malini from going toward Imlie and Aryan telling them that it is bad to interrupt two people.

Malini recognizes Cheeni as the one who picked up Aryan the other day and starts arguing with her.

They both have a funny banter on mannerisms while Imlie fears recognizing Cheeni as Gudiya.

Meanwhile, Aryan notices Imlie's expression and wonders why she is panicked at the sight of Malini with Cheeni.

Before Malini can insult Cheeni more, Aryan and Imlie come to her rescue which shocks her.

Malini starts insulting Imlie and calls Cheeni a mistake of someone which makes Aryan shut her up.

Feeling worried that Cheeni can be the reason for Aryan and Imlie being together again, Malini changes her plan tactic and acts emotionally saying that Imlie is the reason for her being alone.

Aryan scolds Malini for insulting Imlie while Malini brushes off the warning and tells Aryan that she is there to sign the document for buying the Ujala media house.

Back in Delhi, Anu brings gifts to the Rathore house and tells the family members that she is sure Aryan and Malini will return from Pagdandiya as a couple.

Meanwhile, Cheeni gossips about the day's incidents to Meethi and tells her about the city lady while Imlie doesn't inform her about Malini to not worry her.

Cheeni scolds Imlie and tells her that she should talk to Aryan with respect while Meethi agrees with her.

Back in Rathore house, Neela and Preeta try to insult Anu but Anu comments on Preeta's age provoking her.

© Copyright tellybest.com, 2022, 2023. All Rights Reserved. Unauthorized use and/or duplication of any material from tellybest.com without written permission is strictly prohibited.
Cached Saved on: Monday 21st of November 2022 05:28:07 PMCached Disp on: Thursday 1st of December 2022 11:24:06 PM