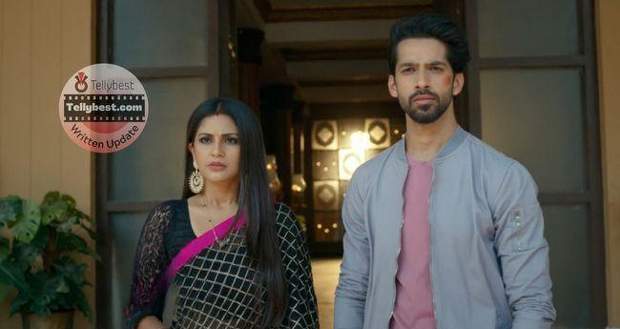 Today's Imlie 5th December 2022 episode starts with Atharva reciting a poem from Ms. Shaira while Imlie thinks that she can not tell Atharva that she is Shaira.

On the other hand, Cheeni comes to Rudra and gives him a greeting card while apologizing to him for her behavior.

Further, Cheeni leaves smirking while Rudra says that she will go on the wrong track even if she is shown the right path.

As Cheeni leaves, Rudra is about the open the greeting card when he is called out as they are getting late.

Later, the family reaches the venue and enters the award ceremony while Rudra forgets the bag along with the greeting card.

Imlie goes back outside and checks that the card and the bag are forgotten in the car.

As she is about to open the card, Atharva comes there and holds her hand saying that he wants her to stay with him as they are called onto the stage to get the bravery award.

Meanwhile, Cheeni smirks as she sees the card with Imlie and thinks that she's glad she ordered two so that she doesn't get caught.

Imlie and Atharva enter the venue when the spotlight hits them while the host calls out to them and calls them a brave couple.

Imlie gets nervous thinking that she is afraid to get on the stage while Atharva holds her hand and tells her that he is holding it so that he doesn't get scared to go on the stage.

Later, both Imlie and Atharva get on stage as the guests clap for them.

Imlie recites a poem that she wrote as Ms. Shaira while Atharva gets impressed.

He asks her further how she knew the poem.

Imlie is about to say that she wrote the poem when Atharva interrupts her saying that she must have read it too.

Atharva thinks that the person who wrote these poems and his hook line, Cheeni become the same old person he fell in love with.

At the same time, Cheeni gets a call from the delivery guy and she puts the phone on speaker due to not being able to hear him.

However, the guy talks about the bomb in the card which Imlie overhears and gets shocked.

She wonders if what she heard is correct and goes to check the area but finds no one there.

Meanwhile, Devika sees the greeting card and is about to open it while Cheeni takes it from her and goes to Rudra.

Rudra tells Cheeni that he knows that she must have written some rubbish in it and doesn't want to read it.

Cheeni keeps on insisting Rudra read the greeting card when Rudra tells her to take out the card and open it herself to read it to him.

At the same time, Imlie sees the card in Cheeni's hand and gets worried.

© Copyright tellybest.com, 2022, 2023. All Rights Reserved. Unauthorized use and/or duplication of any material from tellybest.com without written permission is strictly prohibited.
Cached Saved on: Wednesday 25th of January 2023 11:47:29 AMCached Disp on: Thursday 9th of February 2023 06:01:50 AM