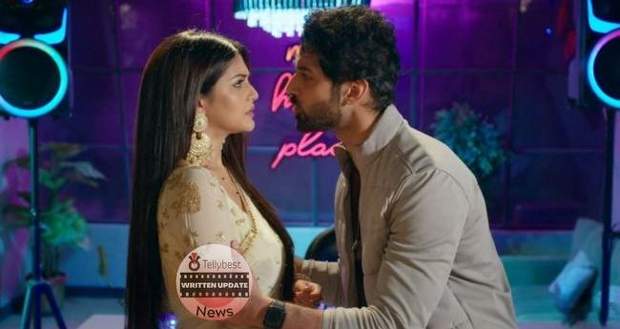 Today's Imlie 5th November 2022 episode starts with Atharva looking at the Moti Roti that Imlie has made with a disgusting expression.

Divya insults it by saying that the Roti must be made for the dogs.

Atharva stands up from the dining table and is about to leave while Rudra stops him and tells him that he should not insult the food by leaving without eating anything.

Imlie apologizes to Atharva and tells him that he should not disrespect the rituals.

Atharva angrily says that since he is so wrong, he should be punished and starts eating the chilies from the dining table.

However, Atharva soon starts feeling the spiciness of the chili and Shivani brings honey but stills as she sees Imlie feeding the Moti Roti to Atharva.

Atharva apologizes to Imlie for judging her cooking and tells her that it is nice.

Later, Keya and Divya are upset that Imlie is being given a saree worth 5 lakhs and taunt her when Imlie reveals that she's going to wear her mother's saree.

Just then, Atharva comes there and tells Divya and Keya to not pressure Imlie as the party is happening for Imlie's welcome and she should have the right to wear whatever she wants.

Imlie feels ecstatic thinking that Atharva has stood up for her.

Back at the Rathod house, the family members are getting ready while Cheeni does not want to come.

However, Meethi reveals that the party is happening for Imlie and Atharva's reception which makes Cheeni say that she will definitely come.

Rupy tells Cheeni to behave and not cause any ruckus as she will be keeping an eye on her.

Back at the party, Rudra's business partners see Atharva at the music stage and make fun of them by saying that Atharva saved money by not having to call the music person.

However, Imlie comes there and defends Atharva by saying that they are lucky enough to hear Athrava's music as people from far away come to hear his music.

The guests call Imlie smart and leave from there while Atharva thanks Imlie for defending him and his music.

On the other hand, Cheeni decides to go in another car while Rupy says that she will also come with her.

Further, at the party, Imlie gets happy to see Cheeni and seeing her holding a box, asks her if it is for her.

Cheeni says that this time she has brought the gift for the person she cares about the most and goes to Atharva.

The family gets shocked as Cheeni smiles and lies that she meant that everybody is most concerned about Atharva due to his accident.

Further, Cheeni brings out the laddoo from the box and brings it near Athrava while he swats her hand away telling her to not do this.

The laddoo flies in the air and Imlie saves it after which she feeds it to Atharva.