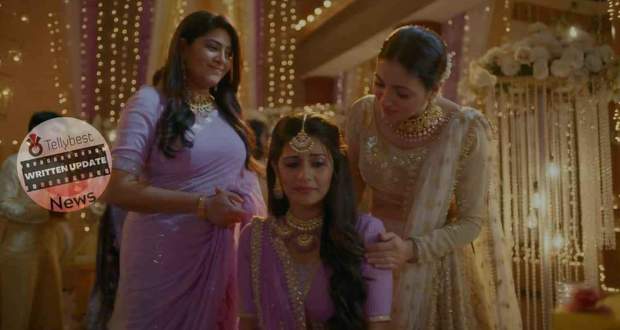 Today's Imlie 5th October 2022 episode starts with Shivani advising Atharva and Imlie tells them that no relationship has a solid foundation if there is no love between them.

Hearing Shivani’s words, Anu and Cheeni get suspicious of the Rana family's weird behaviour as earlier Rudra was fighting with his son and now Arto is giving her looks like a heartbroken lover.

Later, Arto is standing in his room thinking Imlie got engaged with him even after knowing the truth.

However, he realises Imlie is not the kind of girl who will do this and says he loves Cheeni.

At the same time, Cheeni hears his confession and Atharva turns around and sees Cheeni standing in his room.

He tells her about his love for him but she puts her finger on his lips interrupting him.

In Imlie's room, Imlie removes her bangles and speaks a beautiful shayari.

Meanwhile, Atharva enters her room clapping and praising his soon-to-be wife's talent and says she is his love and their love creates magic.

Atharva holds Imlie’s hand and puts his hand on her waist and dances with her in a slow rhythm.

Meanwhile, Imlie asks Atharva if he is happy and her imagination breaks when Rupi calls her.

On the other hand, Atharva dances with Cheeni holding her waist in both his hand and thanks his god for the opportunity.

He takes off his engagement ring and is about to put it on her hand but his imagination breaks.

In Rathore's mansion, Narmada tells Sundar and Arpita that Imlie is her responsibility because she lives in her house and she’s happy that this burden is about to be loosened.

Meanwhile, Cheeni shows her sister the expensive gifts given by the Rana family and tries to keep some gifts but Rupi orders Cheeni to put down Imlie’s gifts.

However, Imlie recalls Shivani’s words and asks her family if Shivani was not happy with their engagement but Sundar assures her.

At the same time, Cheeni gets a call from Atharva and he tells her to meet him outside Rathore's house at 11 pm which confuses Cheeni.

In Rana's family, Devika asks Rana’s reason of frown and he tells her about Atharva’s suspicious behaviour and accuses him of looking at Cheeni with a different emotion.

Rudra thinks Cheeni can come in between Atharva and Imlie so he needs to do something to make Cheeni gets out of his son’s life.

At 11 pm, Cheeni goes outside sneakily and meets Atharva and asks him what’s the matter.

Meanwhile, he tells her to think about why he would come here after getting engaged to her sister.

However, Cheeni gets frustrated and starts to walk inside but Atharva holds her hand stopping her.

© Copyright tellybest.com, 2022, 2023. All Rights Reserved. Unauthorized use and/or duplication of any material from tellybest.com without written permission is strictly prohibited.
Cached Saved on: Monday 21st of November 2022 06:46:38 PMCached Disp on: Tuesday 29th of November 2022 10:33:11 AM