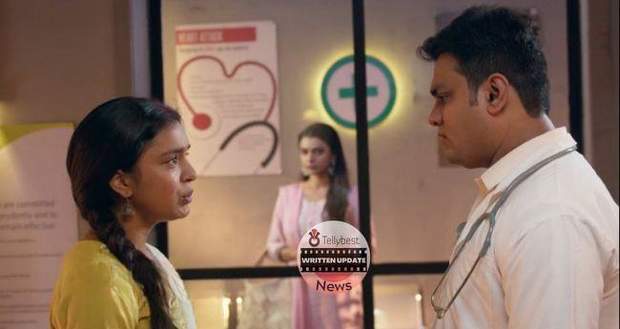 Afterwards, Imlie goes to give the other tiffin to Aryan while he gives her Cheeni’s medicine.

However, Aryan refuses Imlie’s offer of food but she forces him to eat.

Meanwhile, Aryan expresses her suspicion of Cheeni having the same disease as Gudiya.

Hearing Aryan’s suspicion, Imlie sadly thinks that Cheeni is Gudiya while Aryan tells her he feels a unique connection with Cheeni.

At the same time, Malini enters Cheeni’s room and offers Cheeni different kinds of dessert and junk food to her.

Cheeni gets shocked and advises Malini to get her head checked.

However, Malini exclaims to Cheeni that she is her daughter.

Cheeni gets shocked and doesn’t believe Malini but Malini shows a photo of her holding Gudiya.

On the other hand, Aryan advises Imlie to tell her the truth as he doesn’t trust Malini's evil brain.

Imlie doesn’t tell anything to Aryan but he asks her if she’s not afraid of Cheeni’s biological mother taking her away.

However, Imlie denies it and exclaims that Cheeni’s real mother has never loved her.

At the same time, Malini hugs Cheeni and expresses her fake love for Cheeni.

Malini accuses Imlie of taking away Cheeni and requests Cheeni to call her mom.

Furious Cheeni throws Malini’s item on the floor and insults her for being a two-faced woman.

Malini tries to instigate Cheeni against Imlie but Cheeni doesn’t believe her.

Cheeni furiously tells Malini to get out while Malini fills her brain with suspicion.

Cheeni hugs Imlie with a heavy heart while Imlie is flabbergasted.

Meanwhile, Cheeni is about to tell about her conversation with Malini in the hospital when Narmada calls Imlie into the kitchen to take Cheeni’s milk.

Seeing Imlie, Narmada and Arpita request that she not go back to Pagdandiya today to which Imlie agrees.

Meanwhile, Imlie offers Aryan the money for Cheeni’s treatment and says Cheeni's mother is going to bear all expenses.

However, Malini enters and gives the money to Aryan and declares she is Cheeni’s mother so she will bear Cheeni's hospital expenses.

Everyone gets shocked while Malini accuses Imlie of stealing her husband and running away with her daughter while Imlie denies Malini's accusation.

Malini asks Imlie why she stole her daughter and is about to accuse her of loving Aditiya.

However, Aryan yells at Malini to stop talking while Imlie cries at Malini's accusation.

© Copyright tellybest.com, 2020, 2021. All Rights Reserved. Unauthorized use and/or duplication of any material from tellybest.com without written permission is strictly prohibited.
Cached Saved on: Saturday 1st of October 2022 10:12:25 PM