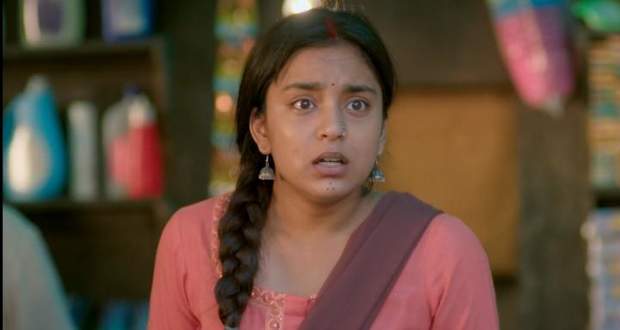 She tells him to return to Mumbai but Aryan refuses saying that he will not return until he gets an apology letter from Imlie.

Malini signs the documents and thinks that she knows Aryan is there to mend his broken heart.

However, Aryan suddenly stands up and goes outside while Malini follows him outside.

They all get shocked to see Imlie throwing cow dung on the walls and throwing it on Aryan once he questions her.

She acts innocent and tells him that she didn't know it was not allowed and that she has to do something as she's unemployed.

Aryan gets angry as he realizes that she's doing everything to irritate him and takes the assignment from a junior to give to Imlie.

Elsewhere, Cheeni is returning home with Meethi with Laddoos while she sees the Ujala office and rushes inside.

However, Malini sees her and questions why she's there.

Cheeni tells her that she's there to meet Aryan and gives a laddoo to Malini.

Malini throws the laddoo into the garbage bin and angers Cheeni.

Cheeni tells Malini that she will always be alone and goes to meet Aryan.

Further, inside the office, Chini meets Aryan and convinces him to come to the school for her speech competition.

Later, at school, Imlie bumps into two men who smell weird (as they are caterers) which makes her confused.

However, she gets even more shocked to see Aryan with Chini and Meethi.

Imlie is about to argue with Aryan but recalls her promise to Chini to be nice to Aryan.

Further, Chini and Meethi go inside while Imlie and Aryan argue while talking sweetly which angers both of them equally.

Chini goes on the stage while Meethi offers a laddoo to Aryan.

Imlie refuses to give it to him but Aryan takes the laddoo and complains that there is less sugar in it.

Afterward, Imlie goes to keep the ladoos with the catered food where she again gets the smell from the boxes.

Before she can open it, the same two men come there and tell Imlie to leave after which they talk among themselves and reveal the ladoos they brought are a week old.

Malini comes there and threatens them to do a job for her.

Elsewhere, Aryan again gives an apology letter to Imlie and tells her to sign it.

© Copyright tellybest.com, 2022, 2023. All Rights Reserved. Unauthorized use and/or duplication of any material from tellybest.com without written permission is strictly prohibited.
Cached Saved on: Monday 21st of November 2022 03:29:45 AMCached Disp on: Friday 2nd of December 2022 02:28:47 PM