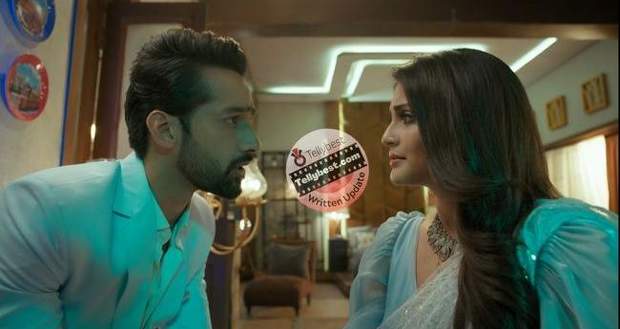 Today's Imlie 6th December 2022 episode starts with Cheeni arguing with Rudra to keep the card while he tells her to open it and read the contents inside.

Meanwhile, Imlie sees the card and gets worried as she thinks that she can not shout or else the crowd will get alert.

Just then, Atharva comes there and Imlie informs him about the bomb in the card.

Rudra takes the card from Cheeni and throws it away saying that he does not like these childish things.

Cheeni gets angry when Atharva comes there and leaves stating that he has gotten an idea.

Imlie rushes to stand on the card so that no one else can take it while Cheeni comes there and looks for the card.

Meanwhile, Atharva starts playing DJ and the guests start piling up in the guest room to hear his music.

Further, Imlie takes the card and goes outside while Atharva goes after her.

They take out the card when suddenly the event manager comes there and takes Imlie away saying that they need her on the stage.

Atharva goes after Imlie while Cheeni smirks as she starts the fan and points it toward the table.

The card flies off and lands near Rudra while Imlie and Atharva see that and get even more worried.

Rudra takes the card and opens it saying that Cheeni should be exposed when the bomb detonates and blasts.

Imlie and Atharva rush to take Rudra to the hospital.

Cheeni smirks while standing in the corner thinking that she took her revenge on Rudra.

The nurse informs them that the doctor is stuck in traffic while Imlie rushes and brings the doctor to the hospital in her scooter.

The doctor rushes to do the operation while Devika blesses Imlie and says that she's a god-sent angel.

Meanwhile, Cheeni meets up with the event manager and he gives her the pen drive containing all the footage of the event.

Afterward, Imlie and Atharva look at Rudra through the glass window who is hooked up to a heart rate monitor and other hospital devices.

© Copyright tellybest.com, 2022, 2023. All Rights Reserved. Unauthorized use and/or duplication of any material from tellybest.com without written permission is strictly prohibited.
Cached Saved on: Wednesday 25th of January 2023 12:09:39 PMCached Disp on: Tuesday 7th of February 2023 12:19:52 AM