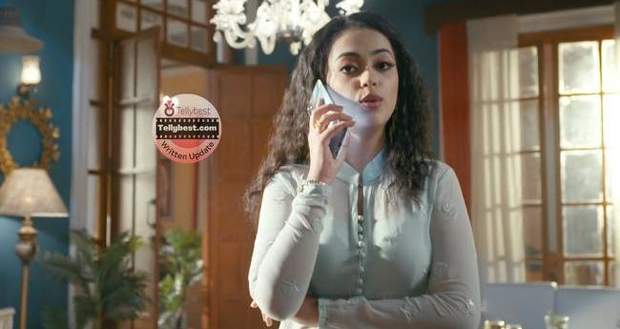 Today's Imlie 6th January 2023 episode starts with Imlie telling the manager that Atharva will not attend the concert.

The manager says that he will suffer a huge loss if no one goes on the stage.

Imlie decides that she will take up this challenge and face the crowd herself.

Meanwhile, Cheeni calls her compliance who is already present at the concert and plots against Imlie.

On the other hand, Gini tells Imlie that she has to go to the stage at which Ripu adds that, Imlie has seen Atharva performing and maybe she can do one of his songs.

However, the manager interrupts and says that he has some music recorded of Atharva, Imlie just needs to put the songs and disguise herself as Atharva while lip-syncing the songs.

The manager asks the spot boy to dim the lights so that no one sees Imlie's face.

The crowd is madly cheering for Atharva while Imlie enters wearing a black overcoat and a big black hat.

Her hands are shaking in nervousness because of which the Pen drive falls down from her hands.

Meanwhile, Atharva finds Imlie's laptop because it was beeping a lot. He finds a message saying that the deadline is closing, and the editor is waiting for her project.

Devika tells Atharva that instead of completing her project she is at the concert fighting for his dreams.

Back at the concert, everyone finds out through the internet that Atharva's wife is performing at the concert and not Atharva making the crowd furious.

Meanwhile, Cheeni gets a call from Abhishek who invites her to a new year's event at the orphanage to introduce her to the media.

Back at the concert, the crowd flashes their phone light on Imlie and finds out the truth and starts booing.

However,  Imlie picks up the Mic and starts reciting a beautiful poem.

Cheeni's compliance says that all of them have come to attend Atharva's singing concert, not her poetry.

Everyone agrees with him and starts throwing cups at Imlie but at the exact same moment, a poster rolls down ahead of Imlie.

As the poster rolls up, Atharva is behind it along with Imlie.

Atharva apologizes to the crowd for being late and the crowd goes crazy in his Fandom.

Atharva says that he was going to break his promise to his fans by not attending the concert, but he has a friend who teaches him the value of life, love, and friendship.

Atharva publicly thanks Imlie and then praises her bravery and loyalty and dedicates the first song to Imlie and sings Tera Yaar Hoon Mai.

He moves towards Imlie and starts dancing with her leaving the crowd in awe.

Meanwhile, Cheeni arrives and watches the couple in jealousy and anger.