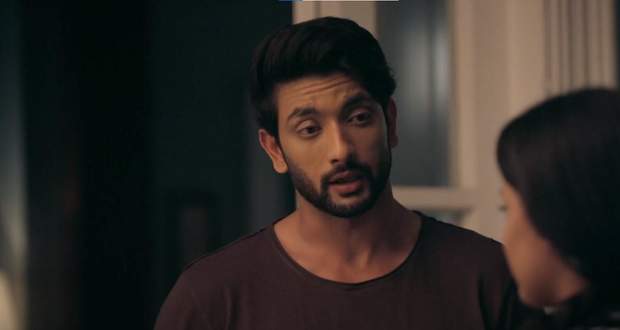 Fearing the worst, Aryan rushes there and attacks Madhav.

Imlie gets shocked by the whole thing and stops Aryan saying that she shouted as Madhav had fallen.

Aryan reveals that he thought Madhav was hurting Imlie while Madhav gets emotional and says that he would never do that.

Imlie apologizes to Madhav and sends him away after which she gets into an altercation with Aryan for thinking so low of Madhav.

Imlie gets angry at Aryan for mistreating Madhav and leaves in fury.

Aryan thinks to get to the bottom of the truth and calls Jyoti demanding her to get the CCTV footage of the night of the sting operation.

Jyoti smirks and further calls someone for help.

The next day, Imlie and Aryan get ready silently while hoping that the other person talks first.

Lastly, they both accidentally talk at the same time.

Aryan asks her out on a date while Imlie offers to go to the office together.

Imlie refuses to go on a date while Aryan tells her to stay home after hearing her take Madhav's name.

Imlie tries to take Aryan's picture saying that she wants to look at the baby's father but Aryan leaves saying that he's getting late.

Later, Jyoti tries to influence Imlie and turn her against Aryan but gets rebuked by Imlie instead.

Meanwhile, Aryan is getting influenced by Jyoti's words and sits in his office in darkness.

Elsewhere, Imlie is talking to Mirchi when suddenly a shadow appears in the window behind her making Mirchi alert.

Mirchi starts making noises which make Imlie turn around and she also gets scared seeing the shadow.

She shouts for help when suddenly Aryan comes there and asks her if she's okay.

Imlie informs him about someone being outside their window and Aryan rushes around the house to find the culprit.

He manages to find a man and is about to attack him when Jyoti stops Aryan revealing that the man is her ex-husband.