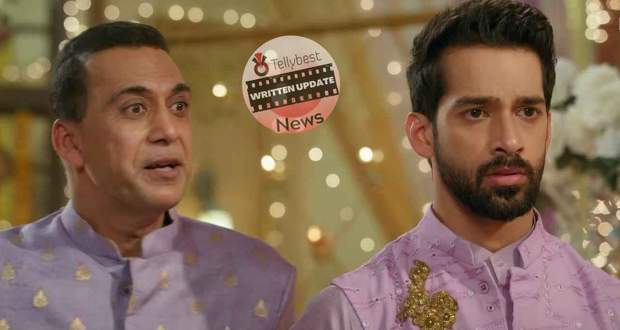 Rudra requests Sundar and Arpita to stop Cheeni and Imlie from meeting each other after the wedding.

However, Sundar informs Rudra and Devika that Imlie will be hurt if they kept Cheeni away from her and Arpita assures Rudra that Cheeni will never hurt Imlie intentionally.

On the other hand, Atharva gifts Cheeni a diamond necklace and shuts her mouth when she is scolding him for his decision to not marry Imlie.

Inside the house, Rudra requests Arpita and Sundar to ponder over their request and goes home.

After some time, Sundar comes out to lock the door but sees Cheeni standing with Atharva and confronts them.

Seeing Sundar, Cheeni makes an excuse that Atharva came to meet Imlie but Sundar gets suspicious of Atharva and Cheeni’s relationship.

Afterwards, Atharva is walking away from Rathore's house when Imlie comes out to find Cheeni and he stumbles on a pot and pricks his hand.

Imlie holds his bleeding finger and puts the soil on and Atharva says his finger can get infected from blood but hearing her deep thoughts he feels regretful for not telling her the truth.

Hearing someone coming, Imlie apologises to Atharva and runs inside her home.

In Imlie’s room, Cheeni is hiding the diamond necklace happily and Imlie asks her what she is hiding but Cheeni dramatically says she is hiding her sadness from the world.

When Cheeni asks Imlie where she was, Imlie starts to blush and tells her sister that Atharva came to meet her and to talk about something with her.

Hearing Imlie’s words, Cheeni feels cheated and thinks Atharva came to meet both of them.

Meanwhile, she tells Imlie that Atharva does not want to marry her and that he wants to break this engagement with her and Imlie starts crying.

Shocked Cheeni consoles her sister and says she is joking while Imlie says she cannot hurt the two families.

Later, Cheeni is happy getting the necklace and thinks she will take more advantage of Atharva.

In the car, Atharva blames God and says he knows Cheeni has no feelings for him and on the other side Imlie is too happy with this engagement.

The next morning, Sundar and Arpita confronts Cheeni for meeting Atharva late at night sneakily but Cheeni states she met Atharva accidentally while he came to meet Imlie.

Arpita says it's weird to meet Atharva at night and Cheeni retorts that she is weird and that’s why no one likes her and goes away.

Being suspicious of Cheeni, Rupi goes to Cheeni’s room and searches for something suspicious and when Rupi is checking the pillows the necklace falls on the ground.

On the other hand, Atharva wakes up and sees his finger completely healed and decides to tell Imlie the truth as he cannot keep her in dark anymore.

© Copyright tellybest.com, 2022, 2023. All Rights Reserved. Unauthorized use and/or duplication of any material from tellybest.com without written permission is strictly prohibited.
Cached Saved on: Monday 21st of November 2022 05:29:10 PMCached Disp on: Wednesday 7th of December 2022 01:18:03 PM