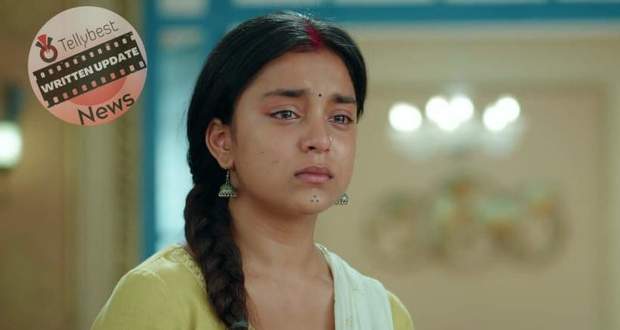 Today's Imlie 6th September 2022 episode starts with Malini humiliating Imlie in front of everyone and calling her a thief.

Aryan tries to support Imlie but Malini twists her questions and makes everyone think that Imlie intentionally took Cheeni with her and informed her that her daughter is dead.

Taking Imlie aside, Aryan tells Imlie to reveal the truth that Cheeni is not Gudiya but Imlie doesn't say anything which angers Aryan.

He thinks that Imlie lied to him while Imlie states that Malini left Cheeni at a temple when she was only three months old and that is a fact.

However, Aryan sides with Malini and tells Imlie that the fact is that she hid the baby for five years and that she once again lied to him after earning his trust for the second time.

Malini argues that Imlie is selfish but gets confronted by Imlie who emotionally says that she saved the child who was left at the temple when it was three months old.

Knowing that she can use Aditya's name, Malini starts her drama and tells everyone that she cannot do that as they all know how much she loves Aditya and would never let go of her last connection to him.

Malini does her acting and begs lmlie to leave and let her live with her daughter from now on.

However, Imlie refuses to leave without her Cheeni and argues with Aryan when Cheeni comes there.

Imlie rushes to her saying that they need to leave for Pagdandiya but Cheeni says that she doesn't want to come here.

Imlie states all the times Cheeni hugged her but Cheeni argues that she made her feel stupid and always lied to her.

Cheeni tells Imlie to leave while Imlie cries that she cannot live without her and begs to keep her there as her maid.

Malini drags Imlie and throws her out of the house while Cheeni goes to Aryan and hugs him tightly.

Neela comes after Malini and throws Imlie's belonging with her as Malini closes the door on her face.

Malini smiles in victory as she hugs Cheeni while Imlie leaves from there.

Later, Malini shows Cheeni a magician doing tricks on a doll resembling Imlie, and tells her that she can change Imlie's future to her wish.

© Copyright tellybest.com, 2020, 2021. All Rights Reserved. Unauthorized use and/or duplication of any material from tellybest.com without written permission is strictly prohibited.
Cached Saved on: Saturday 1st of October 2022 10:49:05 PM