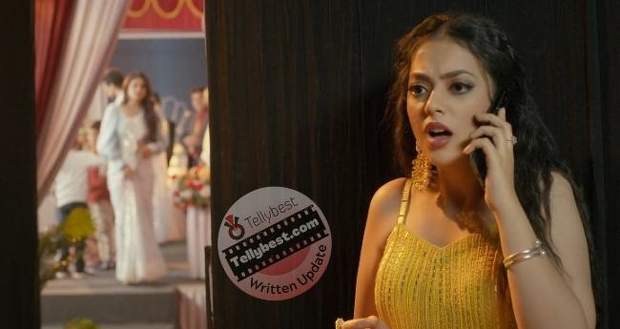 Today's Imlie 7th December 2022 episode starts with Atharva getting emotional as he sees his father lying on the hospital bed.

Atharva leaves from there while he messages Cheeni telling her that he needs her.

However, instead of Cheeni, Imlie comes there and calms down Atharva telling him that he will fall apart if he stays too strong.

Imlie requests Atharva that she is there for him while he finally accepts her comfort and lets his walls down.

Atharva cries as he talks about how he spent most of his life arguing with his father and pursuing music.

Imlie comforts Atharva saying that she is sure the connection of love between him and his father does not need any proof and comforts him as he lays his head on her lap and cries.

Further, Imlie takes Atharva to the temple and tells him to use his singing talent for pride and sing like a devotee of God for Rudra.

Atharva nods as he starts singing a prayer for his father to god while the Rana family gets shocked to hear his singing.

The whole Rana family starts praying with Atharva and Imlie when they get the good news that Rudra is out of danger and is awake now.

The family rushes to meet Rudra while Imlie goes to the reception and calls the police telling them to come to the hospital as soon as possible as Rudra is awake and they can find out the culprit behind the bomb.

Further, Imlie goes inside the hospital room and meets Rudra who is joking to lighten the atmosphere.

The police come there afterward and Imlie reveals that she was the one who called them there so that they can get the statement and catch the culprit.

Cheeni gets worried while Rudra points toward her but his hand falls down midway.

Further, Rudra uses all his force and takes the name of Chandrapraksh, his business rival.

Imlie asks Rudra if he is sure while the flashback shows Cheeni threatening Rudra of feeding poison to Atharva if he takes her name in front of the police.

The flashback ends as Imlie demands to get Chandraprakash arrested.

However, the police say that they can do it only after the whole procedure is complete which angers Imlie.

She leaves the room while Atharva sees her going and goes after her.

She tells Atharva that she is Imlie's daughter and will go herself to teach Chandraprakash a lesson.

Further, instead of stopping Imlie, Atharva tells Imlie that he will also come with her and will help her in Arto style.

© Copyright tellybest.com, 2022, 2023. All Rights Reserved. Unauthorized use and/or duplication of any material from tellybest.com without written permission is strictly prohibited.
Cached Saved on: Wednesday 25th of January 2023 10:23:06 AMCached Disp on: Tuesday 7th of February 2023 12:48:47 AM