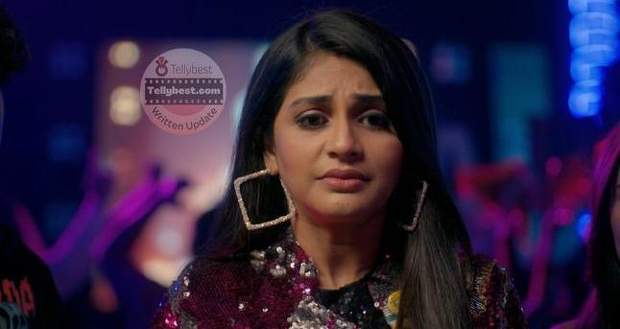 Today's Imlie 7th January 2023 episode starts with Imlie and Atharva slowly dancing in the middle of the crowd while Cheeni watches them angrily.

Abhishek calls Cheeni and tells her that he's leaving for the charity event.

Cheeni angrily snaps at him and says that she's busy and hangs up the phone.

Meanwhile, at the Rana house, Rudra and Devika are counting down the new year's countdown along with Atharva and Imlie on the T.V.

Atharva hugs Imlie tightly as the countdown gets over making Imlie anxious.

The manager tells Atharva that Imlie has recited a beautiful poem before the crowd, leaving Atharva in astonishment.

Atharva moves towards Imlie and says that the poem she recited was of Cheeni's.

Imlie tells him that she wrote the poem and not Cheeni.

Atharva is shocked and asks her if she's Shyra from Bhaskar times.

Atharva tells Imlie that Cheeni lied to him about being the writer of the poems and because of that he fell in love with her.

Imlie leaves and gets bumped into Cheeni and says that she is a liar and a thief.

Cheeni asks her to speak clearly and not act like a poet twisting her words.

Imlie mocks Cheeni and says that she should be able to understand poems after all she is Syra.

Imlie continues to say that she had so much stage fright but was always confident on paper. It was her medium of conveying her emotions.

Meanwhile, Atharva reaches home and finds Imlie's poems which he has saved thinking it was Cheeni's.

Tears roll down his eyes as he says to himself that he was blinded by Cheeni's lie.

Imlie comes from the back and hands over her unpublished set of poems to Atharva and asks him to read it.

He finds out that the first poem is about Atharva himself.

Imlie replies that when she wrote this poem, her whole world revolved around him.

Atharva replies that he doesn't deserve Imlie's love and friendship.

Imlie replies that she no longer has dreams or love left in herself as Cheeni has taken away her soul from her and starts tearing down the pages of her diary.

Atharva picks up the diary and the torn pages as Imlie leaves.

The next day, Imlie gets a call from her sir who tells her that they have to go on a field trip the next day.

Imlie gets very excited and tells Rudra and Devika about it.

Keya watches them from a distance and plans to spoil Imlie's field trip.

Meanwhile, Atharva remembers all the lies that Cheeni has ever said to him.