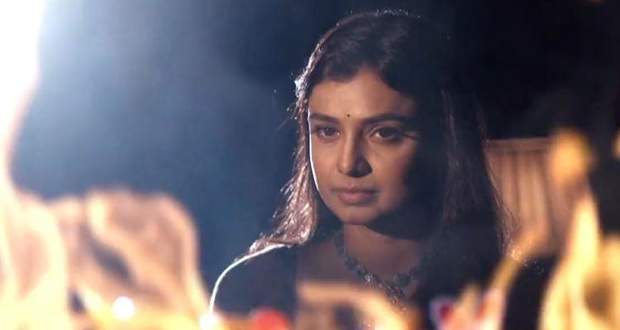 Today's Imlie 7th July 2022 episode starts with Imlie comforting Aryan and telling him that she knows he loves her a lot and that she loves him too.

Aryan hugs her and cries his heart out while Imlie also fails to control herself and starts crying.

Aryan again blames himself saying that Imlie could've lost her life because of him and cries but Imlie comforts him by making him put his hand on her belly.

Just then, they hear a baby crying and look around to find a baby girl without any adult.

Imlie suspects someone left the child there because it's a girl and decides to take her home with them.

Elsewhere, Malini says that she has returned to take her revenge on Imlie.

The next day, the teacher at Southwood college tells the applicants to check their applications as the Dean Ma'am is going to check them herself.

The applicants start touching up their make-up while Gauri stands confused as she's dressed in a simple outfit.

Pinky informs Gauri that Dean ma'am is very modern but doesn't like people in simple dresses.

Back at the Rathore house, Narmada worries for Imlie and Aryan when the couple comes there with the baby shocking everyone.

At Southwood College, Malini tears up Gauri's application form and humiliates her for being from a village.

Meanwhile, the Rathore family is happy to see the baby except for Neela.

However, Aryan tells Neela that it's his decision along with Imlie to keep the baby and that she shouldn't have any problem.

The teacher asks Malini why she rejoined so early as she had taken a maternity leave while Malini says that she just wants to make her daughter proud.

Afterward, Malini thinks that she has sent Imlie something and knows that Imlie will keep it.

© Copyright tellybest.com, 2022, 2023. All Rights Reserved. Unauthorized use and/or duplication of any material from tellybest.com without written permission is strictly prohibited.
Cached Saved on: Tuesday 22nd of November 2022 01:25:19 AMCached Disp on: Thursday 8th of December 2022 02:19:21 AM