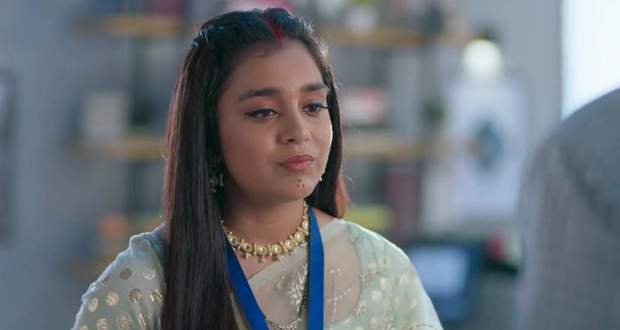 Today's Imlie 7th June 2022 episode starts with Aryan holding the man by collar while Jyoti shouts at him to stop saying that the man is her ex-husband Harry.

Jyoti apologizes to Aryan saying that Harry wanted to apologize to her and she called him there to meet face to face.

Aryan asks Harry if he went near Imlie's room and Jyoti declines saying that she saw Madhav lingering there.

Aryan leaves while Jyoti slaps Harry and blackmails him to kill Imlie.

In Imlie's room, Aryan sees Madhav and starts attacking him while Imlie tries to stop him.

Imlie tries to defend Madhav while Aryan gets angry at even her saying that she is blind as Madhav doesn't even know the true meaning of friendship.

Back in the room, Imlie apologizes to Madhav and makes him leave after which she confronts Aryan.

Aryan tells her that Madhav is not good and is about to speak up just when they hear Mirchi's screams.

Imlie rushes to find him while Jyoti is seen holding a bunch of feathers with blood dripping from them with a menacing look in her eyes.

Imlie gets hysterical and starts blaming herself while Aryan hugs her and rocks back and forth on his heels to calm her when he gets a call from the office.

He tells the office that Imlie will cover the event and disconnect.

Teasingly, Aryan tells Imlie that he's just her boss during office hours and prevents her from romancing as he informs her about the event she'll be covering the next day.

At night, Aryan feels guilty for having to hide the truth from Imlie who is sleeping when he hears a crash outside his room.

He goes to the kitchen and sees Jyoti who apologizes saying that the glass accidentally slipped from her hand.

He injures himself and Jyoti helps him while trying to instigate him again Imlie.

However, Aryan tells her that he hopes she and her husband also work out things and that she can stay as long as she wants.

Jyoti, who is upset at not hearing what she except, plays off her emotion and just smiles at Aryan.