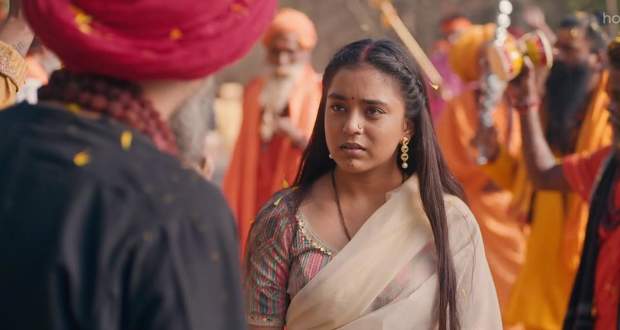 However, Imlie’s anger is soon interrupted by Jyoti who advises Imlie not to waste her anger.

Jyoti calmly explains to Imlie that Sundar’s Bio-Data paper can be printed again with no words of harshness exchanged.

Imlie is impressed by Jyoti’s positivity as she shows Jyoti the way to her room.

However, Jyoti’s positivity seems all bogus after she ends a call and promises to kill the person who is becoming a source of negativity in her life.

At the office, whilst Imlie talks with Madhav, she gets an abrupt call from Aryan.

Aryan is caught off-guard when Imlie asks him whether a fly has entered his mouth or not.

It is Imlie’s chance to feel off-guard when Aryan says he misses his missus; aka Imlie.

Aryan teases Imlie and tells her to come back home as he needs his car.

However, Aryan misses Imlie’s presence and wants to have coffee with her.

Imlie gets all shy as Aryan beckons her to be home.

Meanwhile, as Imlie starts her car’s engine, a girl named Nargis sitting in a car across gets hit by Jyoti's car intentionally.

Imlie runs out to her, calling an ambulance.

A flashback in time is shown where Nargis confronts Jyoti about how she is trying to meddle in Aryan and Imlie’s marital life.

Nargis's so-called brother Harinder was married to Jyoti and now only Nargis knows that Jyoti is after Aryan and spoiling his married life with Imlie.

Jyoti seems mentally disturbed as she tells Nargis Aryan can be hers only as he has been since their college days.

Jyoti joins Aryan at home and promises to create an amicable situation for him and Imlie; a fake promise.

To download Imli all episodes or watch Imlie today's (7 May 2022) latest full episode, go to hotstar.com