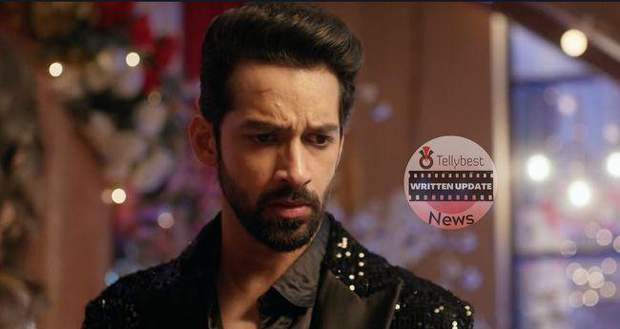 Today's Imlie 7th November 2022 episode starts with Imlie hearing Atharva call her name and trying to get inside the room but finding it locked.

Cheeni gets annoyed while Imlie thinks to fly and get into his room.

Imlie tears a piece of the decorative fabric and wears it as a cape while going towards the outside of the house.

Cheeni requests Atharva to listen to her but Atharva tells her that he listens to only Hip-hop.

Further, Atharva keeps going away from Cheeni thinking of her as Imlie, and argues that it will create a lot of confusion if he starts liking her like how he liked the Moti Roti.

Atharva falls on the bed while Cheeni's patience runs out and she leaves from there.

However, seeing Imlie entering the room through the balcony using the pipe, Cheeni forms a plan to record the newlywed daughter-in-law drunk and ruin her image.

Imlie and Atharva argue about where she entered the room from while Atharva calls her mad.

Imlie takes the statement seriously in her drunkenness and starts crying while Atharva wipes her tears and tells her that they will get her treated.

However, Imlie again starts crying as she tells him that if her mother was there, she would have also wiped away her tears as he did.

Meanwhile, the guests are praising Imlie when they receive the video of a drunk Imlie from an unknown number.

The guests start making fun of Imlie and both the families while Narmada shouts for Imlie to come downstairs.

Imlie comes downstairs with stumbling steps as Narmada scolds her for getting drunk and tells her that she should bury in the ground.

Imlie argues that she is not at fault while the family doesn't listen to her and keeps berating her.

Just then, Atharva comes downstairs and takes a stand for her while stating that he also got drunk as Imlie but nobody scolded him because he's not a girl.

Further, Atharva tells Rudra to punish him but Rudra lets both of them go think of it as their first mistake.

Cheeni gets irritated as she sees the family getting together once again and the guests also forgiving the newlywed couple.

The next morning, Imlie brings Atharva's favorite smoothie for him and talks about all the things she has done for him while he tells her to not do any of those.

Imlie argues that she's just trying to repay the favor since he helped her the previous night.

However, Atharva throws the smoothie into the trash and states that he hates two-faced people.

He tells her that she can keep up her image of the good daughter-in-law in front of the family but can relax when she's with him since he knows her reality.

However, Imlie stops him and states that she had three things to say.

Firstly, she doesn't lie and the second one is that she does not drink.

Imlie also reveals that she got drunk after drinking water from his glass and could've put the blame on him but she didn't and instead supported him.

Lastly, Imlie states that even she hates two-faced people and leaves.

Atharva thinks that Imlie is not wrong and wonders who spiked his glass of water.

© Copyright tellybest.com, 2022, 2023. All Rights Reserved. Unauthorized use and/or duplication of any material from tellybest.com without written permission is strictly prohibited.
Cached Saved on: Monday 21st of November 2022 06:54:07 AMCached Disp on: Tuesday 29th of November 2022 12:22:07 AM