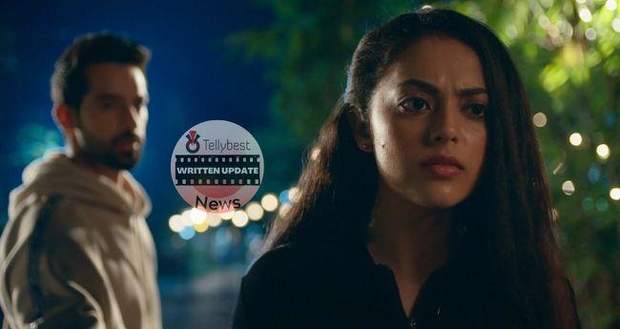 Today's Imlie 7th October 2022 episode starts with Arpita showing a wedding card to Narmada but she declares she is only happy for Imlie’s Vidaai and she’s not interested in the preparations at all.

Meanwhile, Imlie tells her family that Atharva came to meet her last night and Narmada asks the reason for his visit so late at night.

Imlie blushes and Cheeni thinks that Atharva came to meet her not Imlie and goes to check on her necklace.

On the other hand, Narmada calls Rudra and informs him about Atharva's visit.

However, Rudra recalls Atharva telling him that he has a meeting and he apologises to Narmada on his son’s behalf.

Sundar takes the phone from Narmada and tells Rudra that he saw Atharva talking with Cheeni.

In Cheeni’s room, Cheeni is searching for her necklace and Rupi shows her the necklace and says that necklace belongs to Imlie.

At the same time, Cheeni gets a call from Atharva and Rupi snatches her phone and cuts the call and asks her why he is calling her.

Nonchalantly Cheeni tells her to ask Atharva but furious Rupi says she will keep an eye on her and she is ready to become the "Hitler Bua" if needed.

In the Rana family, Rudra announces that Atharva and Imlie’s wedding will be held next week and Atharva gets shocked at the news.

In the Rathore family, Rupi announces to everyone that Cheeni got a marriage proposal and the whole family gets excited and Cheeni glares at her bua.

On the other hand, Atharva tells his father that he will not marry Imlie and he is not going to destroy his, Imlie and Cheeni’s life.

In Cheeni’s room, Cheeni tells Rupi that she does not want to get married but she requests Cheeni to meet Jatin (Cheeni’s Potential Groom) for one time.

However, Cheeni taunts Rupi for getting Imlie married to a rich family while they found her a cheap middle-class family.

Later, Rupi informs her that Jatin’s family is coming to the Dussehra function.

In Rana's family, Sundar informs Rudra and Devika that Cheeni has agreed to meet Jatin and Rudra says that he does not have any problem with Cheeni meeting Imlie if she is married.

At the same time, Atharva enters the room clapping and accuses his father of doing a deal of three lives.

However, Rudra asks Atharva if he knows what Cheeni wants and informs him that Rupi has found this marriage proposal for her, not them.

Puzzled Atharva questions himself if his love for Cheeni is one-sided and decides to confess his love to Cheeni before their lives get entangled with wrong relationships.

In Imlie’s room, Cheeni is about to tell Imlie the reason for Atharva's visit last night but Rupi interrupts them and gives the necklace to Imlie as Atharva’s gift.

Cheeni glares at Rupi when Imlie is wearing her necklace and thinks she will snatch whatever she wants.

© Copyright tellybest.com, 2022, 2023. All Rights Reserved. Unauthorized use and/or duplication of any material from tellybest.com without written permission is strictly prohibited.
Cached Saved on: Monday 21st of November 2022 06:00:18 AMCached Disp on: Friday 9th of December 2022 03:50:58 AM