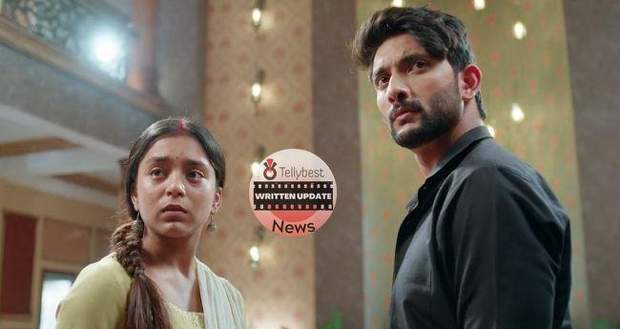 Today's Imlie 7th September 2022 episode starts with Cheeni getting blackmailed by Malini who presents a magician burning a plastic doll into ashes.

Malini informs Cheeni that the doll is Imlie and promises she will make Imlie admit that Cheeni is Malini’s daughter.

Cheeni gets scared when Malini blackmails her for hurting Imlie.

On the other hand, Narmada begs Aryan to handle the storm that has wrecked their life.

Meanwhile, Aryan cryingly says he cannot do anything as Imlie coming and leaving his life is written in his fate.

Arpita curses him for not stopping Imlie but Aryan declares he wants to love his life now.

Aryan holds the tears that dropped from his eyes and kicks them with his fingers.

Meanwhile, Cheeni is watching Aryan sitting on the sofa while Aryan says he deserves to live now.

Arpita tries to stop but Aryan picks up his Sugar and exclaims this time Imlie has hurt Sugar also.

Afterwards, Imlie is standing on the Rathore main gate and Aryan and Cheeni come to the balcony and see Imlie with unsaid emotions.

Meanwhile, Cheeni apologises to Imlie in her mind.

Later, Imlie's heart is crying sitting on the sidewalk helpless when she gets a call from Mithi.

Imlie cryingly informs Mithi about the situation but Mithi encourages Imlie to fight for Cheeni.

On the other hand, Anu gets happy when Malini tells her that she closed Rathore's house door on Imlie’s face.

Meanwhile, Imlie recalls Cheeni telling her about something that happened in the hospital and tries to call Aryan but her phone dies.

In Rathore’s house, Cheeni is wailing for Imlie but Aryan declares no one will take his Sugar to Imlie.

After Narmada and Arpita leave the room, Cheeni confronts him for bad-mouthing Imlie.

Aryan exclaims with a help of Pintu’s story that the wound given by Imlie will get healed with time as she will forget her.

On the other hand, Imlie is requesting strangers for their mobile phones while a kind lady offers her mobile phone.

Hearing the landline ringing, Cheen goes to pick it up but Aryan is coming the same way.

© Copyright tellybest.com, 2020, 2021. All Rights Reserved. Unauthorized use and/or duplication of any material from tellybest.com without written permission is strictly prohibited.
Cached Saved on: Friday 30th of September 2022 05:06:19 PMCached Disp on: Saturday 1st of October 2022 04:53:16 PM