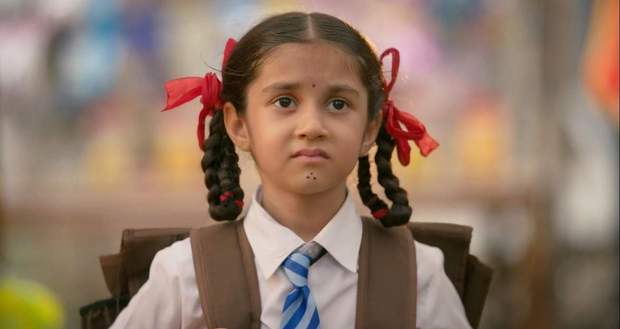 Today's Imlie 8th August 2022 episode starts with Imlie giving the apology letter back to Aryan and indirectly calling him a bull.

Aryan tells her that she'll have to pay for it but Imlie retorts that she will do anything except apologize indirectly.

The competition starts and when it's Cheeni's turn, she is given the topic 'Najayaz' (Illegitimate).

Malini smirks at the teacher as she has bribed her to give such a topic to Chini.

Before Chini can get off the stage, Imlie goes to her and encourages her while the villagers argue that it's cheating.

However, Aryan stands up for the mother-daughter duo and makes him silent.

Afterward, Cheeni gives a speech on what she finds 'Najayaz' and wins the heart of the audience.

In the end, Cheeni wins and she gives a speech about Imlie being the best for her and calls her on stage.

Imlie disappointedly says that she's still working while Aryan tells Imlie to go and be with Chini.

Afterward, the ladoos are distributed while Malini signals the man she hired to cover everything about the event about as has bribed him too.

The kids start falling unconscious and Aryan and Imlie immediately calls for ambulances and help everyone.

Further, as the kids are being put in the ambulance, Malini comes forward and states that the children got sick because of the stale ladoos that Imlie brought.

As a result, the villagers remove Cheeni from the ambulance and refuse to take her to the hospital.

Imlie goes to Malini for help but Malini also demands her sign the apology letter.

However, before Imlie can sign, Aryan comes there with his car and takes Imlie and Cheeni to the hospital.

Later, at the hospital, the villagers berate Imlie while Aryan agrees with them and gets Imlie arrested for jeopardizing the children's health and putting them in danger.

© Copyright tellybest.com, 2022, 2023. All Rights Reserved. Unauthorized use and/or duplication of any material from tellybest.com without written permission is strictly prohibited.
Cached Saved on: Monday 21st of November 2022 06:14:27 PMCached Disp on: Friday 9th of December 2022 06:32:50 PM