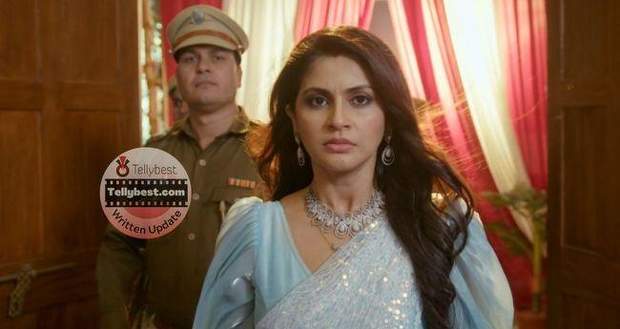 Today's Imlie 8th December 2022 episode starts with Cheeni driving the car in a swift motion and gliding it outside Chandrashekhar's office.

The people looking on get shocked as she brings out a hockey stick and walks inside the office destroying it.

Meanwhile, Imlie comes face to face with a man who pulls out a gun and tells her to stay still.

However, Imlie taunts him saying that the move he did was very low and that he should work hard to be as successful as Rudra Rana and play dirty.

Chandrashekhar's son, Rahul gets confused as a worker comes there and whispers in his ears that his father and Rudra used to be business rivals.

Rahul greets Imlie and informs them that what she is saying is not possible since he has taken over the business for the past three months and his father has gone to America.

He even shows pictures of his father and reveals to her that his father is in America for his treatment.

Imlie gets shocked as she starts apologizing to Rahul for the damage that she did.

Rahul tells her that Rudra has been an inspiration for him and everyone as he has learned so much from him and wishes her the best of luck.

Meanwhile, in the hospital, Cheeni is sitting in Rudra's hospital room while he tells her that she should leave.

Cheeni tells him to not be rude and remember what she can do to his son.

They both banter while Atharva calls Cheeni.

She acts worried in front of him and asks him about finding the person who had planted the bomb.

Atharva tells her that the police will find that person and thanks her for staying with Rudra in the hospital.

As she disconnects the call, she smirks at Rudra and reminds him that she is Atharva's stubbornness.

Rudra argues that he sees worry in her eyes which angers Cheeni as she writes on the notepad that she loves Atharva very much and would become a flame that burns everything to get him.

Imlie reaches the police station but gets held up by the receptionist while Cheeni exits Rudra's room.

Just then, Cheeni gets a call from Rupi telling her that she has found a boy for her.

However, Cheeni tauntingly replies that she loves Atharva and won't marry anyone else before disconnecting the call.

Rupi tells Sundar and Arpita that she knows Cheeni does not love Atharva and only wants Imlie's rights and money.

Shivani, Keya and Divya stop Imlie from going inside the hospital room because she's "bad luck".

They accuse her of being bad luck again and tell her that she can't meet Rudra until her purification is done by the Babaji.

However, Imlie mocks them for being in the hospital and believing in Babaji and stuff.

Devika comes in support of Imlie while Imlie sits on the ground and starts her drama saying that they should pull Rudra out of the hospital and get him treated by the Babaji too.

The Babaji comes there and Imlie starts her drama even more telling Babaji to stand with the ladies so that she can take a picture which she will put in the newspaper for doing such a good thing.

Keya gets embarrassed as she says that she doesn't believe in Babaji and sends him away.

Imlie apologizes to Shivani and goes inside while Devika tells Shivani that her actions have shamed the whole family.

Meanwhile, Imlie questions Rudra for the name of the real culprit while informing him that Chandrashekar is not even in India for the past few months.

Rudra apologizes to Imlie for not being able to tell her the name while Imlie leaves from there and goes to the temple to pray for him.

She prays that she finds the culprit while Atharva comes there that tells her that he wishes God completes all her wishes until she keeps smiling.