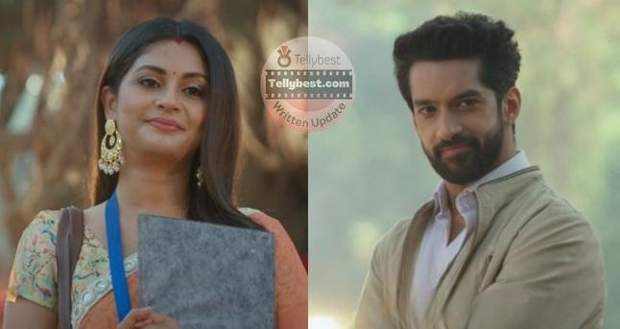 Today's Imlie 8th January 2023 episode starts with Imlie praying to God that she finally feels like a grown-up, now that she is going alone on this field trip.

Atharva watches her from a distance and says to her that if she is not sleepy then should at least let God rest.

Atharva requests her to recite a poem but Imlie rudely says that she is no longer the Imlie who used to write poems.

Atharva says that her poems are embedded in her heart and no one can take it away from her.

Imlie goes towards Atharva and then recites a poem about life.

Imlie says that now he has to go because she has a field trip tomorrow.

Atharva asks why she did not tell him about her field trip.

Imlie says that since he can hide such a big thing from her, it does not matter to her to tell him every detail of her life.

Atharva's eyes get filled with guilt and regret, he apologizes to Imlie and then asks her if she is nervous.

Imlie remains quiet because she did not want to accept her nervousness.

Atharva teases Imlie that she can fight goons but is afraid to go on a field trip.

He consoles Imlie and makes her believe that everything will go perfectly.

Imlie again recites the poem to Atharva and when she turns back, she sees that Atharva has fallen asleep.

The next day, Imlie nervously packs her things and prepares to leave when she finds out that there is a 'Shanti Pooja' in the house.

It was Keya's plan to undermine Imlie.

Shivani goes to Imlie and asks her to prepare the Pooja thali.

Shivani mocks her and says that if she doesn't want to do it then she will make the Thali herself.

Imlie stops her and then says that she will prepare it.

Imlie goes into the kitchen and Keya joins her.

Keya tells Imlie mockingly, that if she wants to leave then she can leave as Shivani will do her work.

Imlie understands Keya's intentions and then asks Keya to help her prepare the thali instead of Shivani.

Keya starts giving vague excuses and pretends that her hand is paining a lot.

Meanwhile, at Rathore's house, Cheeni calls Abhishek and scolds him about donating all of his earnings to the charity.

Anu enters and asks Cheeni to leave Abhishek and go after Atharva again.

Back at the Rana house, Atharva finds out that Imlie hasn't left the house because of the Pooja.

He goes to Imlie and scolds her, however, she gets a call from her boss who asks her to reach the field trip directly.

Meanwhile, at the Rathore's house, Abhishek comes and asks for Rupy's permission to take Cheeni away as he wants to show her something.

Back at the Rana house, Atharva goes to Shivani and says that Imlie has to attend the field trip at which Shivani snaps and says that she can't go anywhere without the elder's permission.

Rudra enters and says that Imlie will go on her field trip.

Keya angrily says that he didn't let her work but has changed the rules for Imlie.

Rudra replies that Imlie wants to work by doing hard work, unlike Keya who wanted to become the MD of the company without any qualifications or experience.