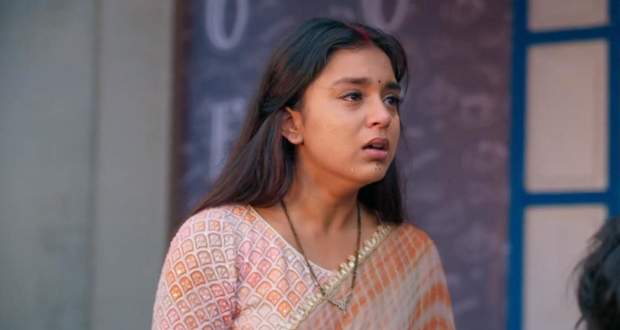 Today's Imlie 8th July 2022 episode starts with Imlie playing with the new baby as Aryan gets irritated by the noise and stops her from talking to the baby in that voice.

They both tease each other and Aryan gets up to change the baby’s diaper.

After that, when he asks Imlie to throw him a milk bottle to feed the baby, she playfully throws a diaper on him instead and starts giggling.

Aryan then brings a book to read to the baby but Imlie stops him as the baby goes to sleep.

Meanwhile, looking at the hospital bills, Anu questions Malini about why did she even give birth to Aditya’s child.

As she’s saying that, Malini recalls the scene in the hospital where she agreed to have an abortion in front of the doctor but stops after seeing Imlie and Aryan’s wedding news on the screen.

She remembers all the flashbacks of Imlie and Aditya throwing her out of the house.

Before going to get an operation, she decides to take revenge on Imlie by keeping this child.

Coming back to her senses, she tells Anu how this kid that has reached Imlie will be the source of all upcoming problems in her life.

Later on, Aryan decides to go to the police to file a missing report of the child so that her real parents can be found.

Imlie calls the baby Gudiya and asks Aryan to come back soon, and Aryan kisses Imlie on the cheek before leaving.

After he goes, the family members start playing with Gudiya and the baby starts crying.

When Neela picks up the baby to stop her from crying, the baby accidentally pees on her and Imlie starts teasing her for that.

Narmada asks Imlie to bring milk for the baby, and she starts warming up the milk in the kitchen for Gudiya.

Suddenly, Imlie loses control and faints in the kitchen, while Neela walks into the kitchen and smiles seeing this.

She thinks about how Aryan talked to them rudely for the first time because of Imlie and she won’t let another member of Imlie’s family be added to the house.

At the same time, someone rings the door and Neela gets up to see who it is and leaves an unconscious Imlie in the kitchen.

At the door, some women enter the house claiming that they belong to a girls' foundation.

Neela has secretly ordered them to come dressed to their house like that and instructed them what to say.