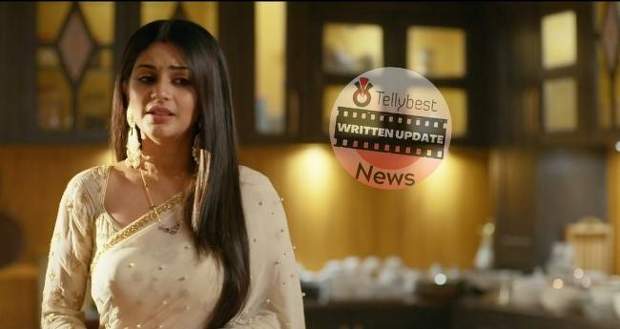 Today's Imlie 8th November 2022 episode starts with Cheeni talking to her colleague Nisha and making up a fake story of her mother being sick to convince them into giving her money.

Cheeni thinks that she will get the designer lehenga and get the spotlight during the Pagphera ceremony.

Just then, Atharva comes there and Cheeni goes to him asking him why he's there.

Atharva demands to know why she mixed alcohol in his glass.

However, Cheeni makes up an excuse and lies that the glass was for her since she was upset after seeing them dancing together.

Atharva apologizes to Cheeni when suddenly Nisha comes there and demands her money back.

Nisha tells her that she checked her computer and found out what she took the money for.

Cheeni tells Nisha that she will give her money later and makes her leave while Atharva questions Cheeni.

Cheeni again weaves a lie that she is broke because of Imlie having control over all the businesses.

Atharva being emotional decides to take up her financial responsibility and leaves saying that he will talk to Imlie.

Later, at the Rana house, Devika gives gifts for the Rathore family to Imlie and Imlie asks her if she bought anything for Cheeni or not.

Devika and Rudra's expressions become sour while Imlie clears the awkward atmosphere by saying that she'll get something for Cheeni.

Further, Cheeni goes to her room and starts packing the bags while Atharva comes there and sees her.

Imlie gets her expensive suit and writes Cheeni's name on it while Atharva questions her.

Imlie says that Cheeni has a right to everything before her while Atharva argues about her not having ownership over the business.

Imlie once again speaks fondly of Cheeni and states that she wants to be independent and self-responsible as she already knows that she has a right to the business.

Imlie ties a knot on her saree and tells Atharva that she has saved their first fight.

Later, Imlie is doing the pooja while Atharva wonders who is the right one between Imlie and Cheeni.

Further, Atharva thinks that he doesn't care if Imlie is wise or not as he loves Cheeni and will not being Imlie back from the Pagphera ritual.

On the way to Imlie's car, Imlie starts talking about the family members while Atharva is surprised at the information and thinks that the family looks more like Imlie's family than his own.

The couple reaches Rathod's home and is greeted by the family happy.

Meethi asks Imlie if she is alright at the Rana house.

However, Imlie says that she's not fine and that it is because of Atharva which silence and shocks everyone.

© Copyright tellybest.com, 2022, 2023. All Rights Reserved. Unauthorized use and/or duplication of any material from tellybest.com without written permission is strictly prohibited.
Cached Saved on: Monday 21st of November 2022 01:24:26 AMCached Disp on: Thursday 1st of December 2022 01:13:23 PM