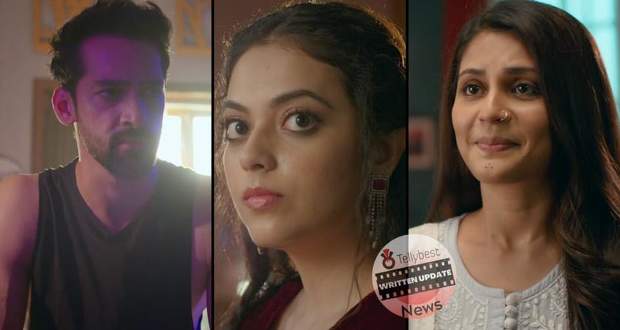 Cheeni confronts Rupi for giving her necklace to Imlie and tells that Atharva gifted her the necklace as a bribe to break his engagement with Imlie.

However, Rupi does not believe her and blames Cheeni for hating Imlie and Atharva’s relationship.

In Rana's house, Devika comments to  Rudra that their children have grown up in a blink.

Rudra tells his wife about Atharva finding his own way from childhood and Akash's innocence turned to malice with time.

Gloomy Rudra blames himself for not being able to save Akash and tells her he does not want to stop Atharva from paving his own way.

He tells Devika that Imlie resembles her and he is sure Imlie will help support Atharva in bad times as she did.

Devika is happy that Atharva got engaged with Imlie but Rudra informs his wife that Atharva still loves Cheeni.

In Rathore's mansion, Cheeni and Imlie are selecting clothes for the Dussehra function and Imlie teases her sister while Sundar is watching them with a frown.

Meanwhile, Arpita informs Sundar about Narmada going to the temple and Sundar tells her about his worry about Rudra's words being correct that Atharva and Cheeni have feelings for each other.

Later, Atharva gets a thank you message from Imlie but thinks that Cheeni is messaging him from some other number.

At the same time, Cheeni steals Imlie’s phone as her phone is seized by Rupi and messaged Atharva to meet at 4 pm on the Dussehra pandal.

Meanwhile, Kia eavesdrops on Atharva talking about meeting Cheeni and gets scared of their plan getting exposed.

Afterwards, in Dussehra Pandal, Imlie holds Cheeni’s hand tightly and goes to meet Jatin and his family but Cheeni takes Imlie on a side to distract her.

Cheeni leaves Imlie alone and she gets scared and starts to find her sister.

On the other hand, Arpita, Sundar and Rupi meet Jatin and his family and wait for Cheeni and Imlie while Rupi is worried about Imlie’s agoraphobia (Fear of Crowds).

At the same time, Atharva enters the fair and tries to find Cheeni while she is trying to find a network and he suddenly sees her and calls her name.

On the other hand, Jatin goes to find Cheeni as they are taking too much time.

Meanwhile, on the verge of a panic attack, Imlie tries to call Rupi but the call is not reachable so she sits on a stool and waits for Cheeni.

However, Imlie does not know that she is sitting right behind the Ravana effigy.

© Copyright tellybest.com, 2022, 2023. All Rights Reserved. Unauthorized use and/or duplication of any material from tellybest.com without written permission is strictly prohibited.
Cached Saved on: Monday 21st of November 2022 03:59:57 AMCached Disp on: Thursday 1st of December 2022 12:03:15 PM