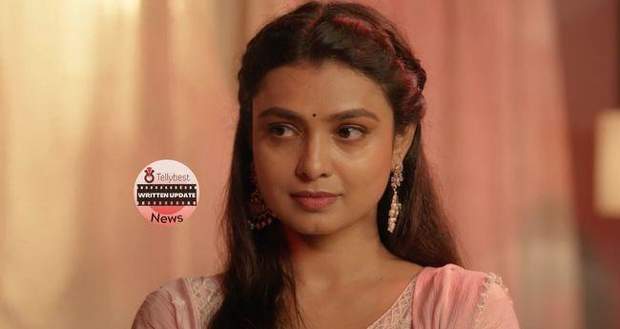 Meanwhile, Cheeni recalls Imlie waking her up in Pagdandiya for school and teasing her that her first word was “Chichi'' and Imlie’s "Chuchu".

Both Cheeni and Imlie talk in their secret language and Imlie decodes that Malini is blackmailing Cheeni with black magic.

Imlie informs Cheeni that she will wait for her outside of the mansion.

At the same time, Aryan interrupts Cheeni and she runs to her room while Malini has eavesdropped on Imlie and Cheen’s conversation from their receiver.

Afterwards, Aryan asks Malini why she is standing with a decorated car in front of Rathore's mansion.

Meanwhile, Malini requests Aryan to persuade Cheeni to go with her to Anu's house.

Hurt Aryan agrees and informs Malini to take care of Cheeni and tells her he wants to maintain his relationship with his Sugar.

On the other hand, Neela and Preeta make fun of Anu as Cheeni will be running around her all day.

Meanwhile, Aryan finds Cheeni running from the mansion by climbing down a rope of bed sheets.

Cheeni yells at Aryan from the ground floor that she needs to go while Aryan runs to catch her.

However, Malini is talking to Anu while Cheeni hides behind a pot.

Cheeni successfully runs from there while Aryan runs in search of Cheeni.

Meanwhile, Malini tells Anu that she has arranged for Imlie’s exit from her life.

Anu asks about Malini’s plan and finds out Malini has planned Imlie’s murder.

On the other hand, the truck driver and his friend are watching Imlie and approve of her identity from the photo that Malini sent them.

Just then, Imlie is running in the centre of the road while the truck approaches her at full speed but Imlie changes her track.

Meanwhile, Aryan stops Cheeni and tries to persuade her but she doesn’t listen and runs down the road.

On the other hand, Imlie goes to pick up Aryan’s bracelet and gets hit by a full-speed truck in reverse gear.

Cheeni screams Imlie’s name trying to find her and Aryan stumbles to the ground as he could feel something bad happening with Imlie.

Aryan sees his injured hand but runs towards Cheeni while on the other hand, Imlie is bleeding from her head which is known neither to Aryan nor Cheeni.

Meanwhile, Malini crazily cries and laughs at seeing Imlie bleeding on the live video and exclaims that Imlie is dead.

On the other hand, Cheeni doesn’t find Imlie and Malini takes her away but Aryan finds his bracelet on the road.

Just then, an ambulance passes beside Aryan which contains an injured Imlie and Aryan takes Imlie’s name feeling her presence.