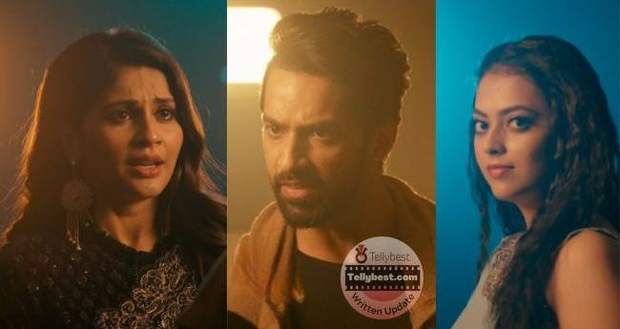 Today's Imlie 9th December 2022 episode starts with Imlie telling Atharva that she needs his support in finding the culprit and extending his hand as she asks him if he will support her.

Atharva holds her hand as he tells her that he will never leave her but thinks that Imlie will herself leave him once she learns of the betrayal he has given her.

Meanwhile, the nurse enters Rudra's hospital room and starts the fan which makes Cheeni's note fly out of the room and directly under Imlie.

She reads the note (That says she loves Atharva and would burn like a flame to burn everything else)  and gets surprised while Atharva smiles at her and leaves from there.

Imlie thinks that she knows many people like Atharva but this is her happiness and she does not want to give it to anyone else.

She thinks that she has to find the girl first to make sure that she's not jumping to false conclusions.

Just then, Cheeni comes there and asks Imlie what she is doing there.

Later, Cheeni is talking with Atharva about her family finding a boy for her and asks for help while he tells her that she should try to explain to them and not force her to get married.

The next day, Cheeni tells the Rathod family that she will not meet with any average middle-class guy and is about to leave when Rupi stops her.

Rupi gets emotional and manages to convince Cheeni to at least meet the guy.

On the other hand, Atharva and Imlie return home with Rudra while the family members express how much happy they are to see him back.

Shivani is about to do the pooja but Rudra stops her and asks her to give the plate to Imlie and scolds her for doing the Babaji drama with Imlie.

Shivani leaves angrily followed by Divya while Imlie welcomes Rudra into the house.

Afterward, Atharva brings food for Rudra who requests he sit and listen to him.

Rudra tells him that he is happy to have a son like him and requests Atharva to be a good husband to Imlie too.

However, Atharva tells Rudra that he has naturally fallen in love with Cheeni and that either his or Imlie's heart is going to break when the truth is revealed.

Rudra requests Atharva to make sure that no injustice is done to Imlie while Atharva leaves from there.

Meanwhile, Cheeni talks to Anu on call and asks her how to get Atharva's attention as he seems to be focused on Imlie and his family more.

Anu advises Cheeni to meet with the guy Rupi chose and do such a drama that will make Atharva come running to her and her only.

Afterward, Cheeni intentionally walks past Atharva while he tells her to reject the guy in a way that the poor guy doesn't feel upset.

However, Cheeni says that she will decide whether to say yes or not only after meeting the guy.

Atharva asks her what she means while Cheeni says that she is going to cut her wrist if the family forces her to marry and leaves saying that she is as helpless as him.

Atharva falls feeling his whole world shattering while Imlie comes there and helps him while asking him if he is okay.

© Copyright tellybest.com, 2022, 2023. All Rights Reserved. Unauthorized use and/or duplication of any material from tellybest.com without written permission is strictly prohibited.
Cached Saved on: Wednesday 25th of January 2023 10:45:21 AMCached Disp on: Monday 6th of February 2023 06:05:42 AM