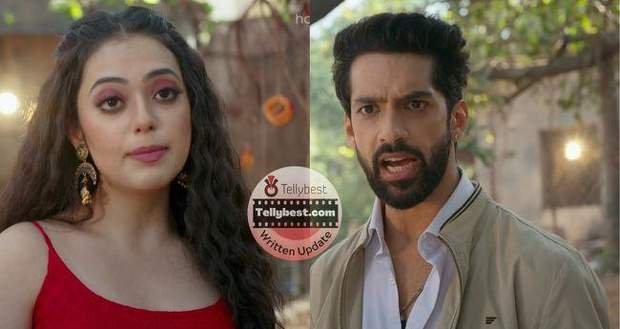 Today's Imlie 9th January 2023 episode starts with Rudra telling Atharva to drop Imlie off while Shivani argues that Imlie needs to be there to sing the Bhajan.

Imlie tells Shivani that she will sing the Bhajan.

Later, Imlie sings the Bhajan on a video call while she and Atharva are on their way to the village.

Atharva thinks that Imlie is a real fighter and thanks God for bringing her into his life.

Further, Imlie rushes to her boss and apologizes for being late while he accuses her of abusing her position as the owner of the company.

Imlie apologizes saying that she will never be late and tells him and the rest of the employees that she wants to learn from all of them.

Afterward, all the employees form a mob and dance to teach the villagers about the importance of education and cleanliness.

However, the speaker stops midway and the villagers start leaving.

Atharva starts rapping and beatboxing which entertains the villagers.

On the other hand, Cheeni and Abhi also come to the same village while the Sarpanch comes there and gives respect to both of them.

Cheeni gets happy when the man calls her "Medam" while Abhi tells him to call him only Abhishek.

Cheeni gets angry as she realizes that this is not a date while Abhi tells her that this is why he donates to charities since girls and unprivileged people can get an education.

They learn that people from Bhaskar Times have come and they go there.

On the other hand, Atharva tells Imlie all the brave things she has done till now and tells her to not give a speech but just talk to the villager wholeheartedly.

All the employees encourage Imlie and she gives a beautiful speech about the importance of education while including her own life.

However, Cheeni interrupts her in the middle by loudly clapping and humiliates Imlie as she tells the villagers and everyone else that Imlie is not educated and is illiterate.

Cheeni reveals that Imlie was put in Delhi's best school but got rusticated from there.

Imlie feels upset while Abhi looks at the drama that Cheeni has created.

Atharva stands up for Imlie and tells her that Imlie is a graduate and tells the villagers about Imlie's poetry and her being nicknamed fighter Imlie.

Cheeni tells Imlie to speak for herself while Atharva tells her that educated people don't need to justify themselves.

Cheeni angrily stomps away while the villagers praise Imlie and all the kids say that they want to be like Imlie.

Further, Atharva praises Imlie and tells her that now it feels like she really is Sr. Imlie's daughter.

Just then, Imlie's senior comes there and asks her if she would like to return to Delhi with them.

However, seeing Atharva's melodrama, Imlie tells them that she will go with her husband.

© Copyright tellybest.com, 2022, 2023. All Rights Reserved. Unauthorized use and/or duplication of any material from tellybest.com without written permission is strictly prohibited.
Cached Saved on: Wednesday 25th of January 2023 06:01:50 PMCached Disp on: Sunday 5th of February 2023 03:57:03 AM