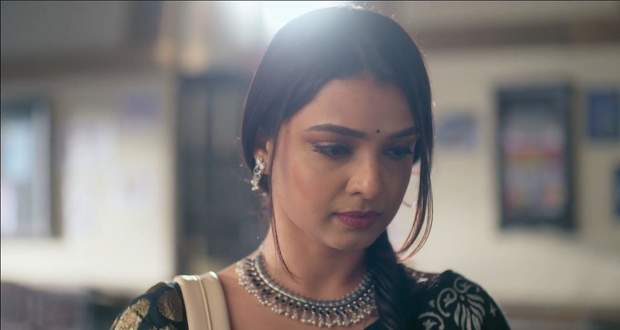 Today's Imlie 9th July 2022 episode starts with a bunch of women at the door of the house claiming that they belong to a women’s NGO, which Neela has staged.

They claim that the family cannot keep a child illegitimately in the house and they need to hand over the baby.

Neela insists on sending the kid with them but Arpita and Sundar resist and start looking for Imlie first.

The people from the NGO forcefully try to snatch the baby away from Narmada while Imlie regains consciousness after hearing the baby cry.

Confused about what happened, Imlie walks out where Arpita tells her about the situation.

After asking about the NGO’s name, Imlie realises that it is a fake organisation and she runs to find Aryan entering from the gate.

She drags him to the car with her and Aryan is confused about what’s happening, when she tells him.

Imlie gets a call about the baby’s location and she drives to that place.

Meanwhile, Neela picks up a call with Malini on the other side, who is pretending to be the head inspector of their district in order to question Neela about the baby.

Neela gets worried and says that the baby is okay but Malini insists on talking to Imlie, but Neela avoids her by saying Imlie is not at home right now.

Malini figures out Neela’s lie and says she’s going to make this baby the biggest problem of Imlie’s life.

After that, Arpita hands over 2 tickets to Neela and Gudiya and requests them to leave the house and not cause any more trouble in their life.

Neela starts pretending to cry and says that she was trying to do what is best for the family.

Saying that she doesn’t have a say in this house, Neela keeps repeating that Imlie should focus on her own child.

Arpita lashes out at Neela and says that Imlie has to face so many problems because of Neela today.

Meanwhile, Imlie and Aryan go inside the nursery where the baby is kept, as they have been informed.

While figuring out how to enter the nursery, Imlie asks Aryan to take her shopping which confuses Aryan.

They both buy clothes to disguise themselves in order to enter the nursery without being caught.

Pretending as if they’re government officers who are here to do an inspection, the manager lets them enter.

After entering, they both freeze from concern seeing the baby there.

© Copyright tellybest.com, 2020, 2021. All Rights Reserved. Unauthorized use and/or duplication of any material from tellybest.com without written permission is strictly prohibited.
Cached Saved on: Tuesday 9th of August 2022 08:24:33 AMCached Disp on: Sunday 14th of August 2022 11:38:57 AM