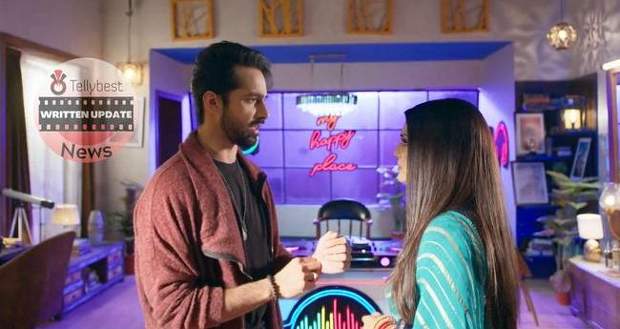 Atharva gets confused while Imlie clarifies that she was just joking to lighten up the situation.

Meanwhile, Cheeni finds lotus in the kitchen which she is allergic to, and thinks to use it to her advantage.

Imlie and other family members get worried seeing Cheeni coughing and rush to her aid.

Later, Imlie sees the spoon in the fridge and the lotus after which she goes to Cheeni and scolds her in front of everyone.

Imlie scolds Cheeni for trying to get out of work with the excuse of being sick.

The family members ask her how she knows about the leaves from the office and Imlie reveals that she saw the mail opened in Cheeni's laptop.

Further, Cheeni weaves a lie and says that she ate the ice and became sick out of frustration for not being able to buy a gift for Imlie.

Cheeni asks as if she's upset she ruined the ceremony and says that they should do it now only.

Atharva and Imlie do the rituals and put their handprints on a white cloth as Cheeni looks on.

Later, Imlie goes to make soup for Cheeni while Atharva sits with Cheeni trying to convince her to drink the herbal tea.

Imlie calls her asking about something regarding the soup while Cheeni gets annoyed and tells her to add whatever she wants.

However, Imlie forgets to disconnect the call while Cheeni also doesn't put the telephone down properly.

Atharva tells Cheeni that he cannot live in a lie anymore and wants to reveal their relationship to anyone.

However, Cheeni reminds him that they had planned to get Imlie's property first.

Atharva tells Cheeni that he thinks Imlie is a good girl and that the sisters are having a misunderstanding.

Just then, Cheeni sees the telephone not cut properly and worries wondering if Imlie overheard their conversation.

Atharva says that he wishes she did and tells Cheeni that he will not take Imlie back home.

Imlie comes there and claps which worries Atharva and Cheeni.

However, Imlie hugs Atharva revealing that she also doesn't want to go home when Cheeni is sick, and thanks him for staying back a day.

Later, the Rathod family is talking about Senior Imlie's birthday and jokes to Atharva about knowing how to handle kids.

Atharva gets confused as the family members pull his leg by saying that Imlie has kids.

Imlie takes him to their room and reveals to him that she was talking about an orphanage that her parents had adopted.

Imlie reveals that she goes to the orphanage and celebrates her mother's birthday with the kids there.

Meanwhile, Atharva gets smitten and tells Imlie that it is cute.

© Copyright tellybest.com, 2022, 2023. All Rights Reserved. Unauthorized use and/or duplication of any material from tellybest.com without written permission is strictly prohibited.
Cached Saved on: Monday 21st of November 2022 10:35:57 AMCached Disp on: Sunday 4th of December 2022 11:11:16 PM