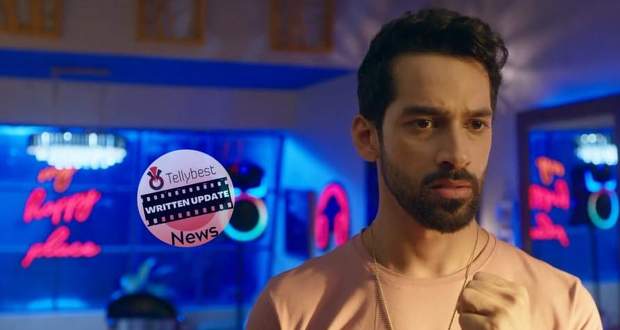 Today's Imlie 9th October 2022 episode starts with Atharva running towards Cheeni while Imlie sits behind the Ravana praying for Cheeni to rescue her.

On the other hand, some children put Ravana effigy on fire in child play and a stampede happens.

Suddenly a man sees Imlie sitting underneath Ravana's effigy and screams at everyone to help her.

Atharva sees Imlie and dashes to save her while the effigy burns and is about to fall off.

Fortunately, Atharva grabs Imlie out of the way when the effigy falls and rolls out.

Lost in each other's eyes, Imlie sees Atharva’s sleeve burning and taps the sleeve to stop the fire.

Just then, he scolds Imlie for sitting underneath Ravana and makes Imlie cry and apologises to her when he sees her crying.

Kind Imlie forgives him and expresses her gratitude for saving her in pure Hindi.

Hearing Imlie’s words about Cheeni being different, Atharva goes to find Cheeni after telling Imlie to wait for him here.

Later, Atharva calls Cheeni and she is stuck between the crowd and scolds him for making her wait.

Meanwhile, not being able to wait any more, Atharva confesses his love to Cheeni and tells about Rudra fixing his engagement with Imlie and screams I love you to her.

However, Cheeni's phone has fallen on the ground and she is trying to pick it up and does not hear Atharva’s confession.

Meanwhile, Atharva tells Cheeni that he will fight his whole family if she’s ready to be with him.

At the same time, Cheeni picks up her phone and asks Atharva to come to meet her and tell her location by raising her hand.

Seeing Cheeni, Atharva dashes towards her but he sees a lost child and he goes to rescue her.

On the other hand, Jatin grabs Cheeni’s hands and takes her back to her family while Cheeni throws her sarcastic remarks at him.

Later, Atharva is standing with Imlie when the Rathore family and Jatin’s family meet them.

Imlie shows Atharva’s burnt hand to everyone worriedly and tells about the Ravana incident.

At the same time, Jatin arrives with Cheeni and Atharva gets shocked when Arpita tells Imlie to thank Atharva for the necklace.

Hearing Arpita’s words, Atharva's heart breaks and he thinks Rudra's words about Cheeni not loving him are correct.

In Rana’s house, Rudra hears Kia and Akash's conversation and gets furious when he finds out that Atharva has gone to meet Cheeni.

In the Dussehra Pandal, Atharva leaves while Imlie advises him to put medicine on his burn but he says there's no medicine for his burns.

However, Cheeni is not able to understand why Atharva is giving her sentimental looks while Imlie thinks she can understand Atharva’s words from his eyes.

On the other hand, Rudra is angry at Atharva’s words and tells his family about Kia hearing his conversation with Cheeni.

At the same time, Atharva reaches the Rana house and announces his presence.

© Copyright tellybest.com, 2022, 2023. All Rights Reserved. Unauthorized use and/or duplication of any material from tellybest.com without written permission is strictly prohibited.
Cached Saved on: Monday 21st of November 2022 07:44:42 AMCached Disp on: Wednesday 7th of December 2022 12:34:43 PM