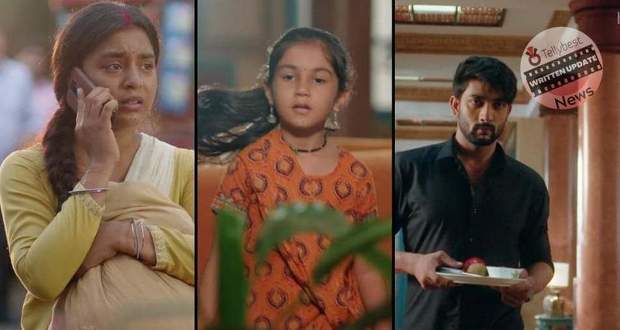 Today's Imlie 9th September 2022 episode starts with Imlie being taken away in an ambulance while Aryan holds Imlie's anklet in his hand.

Cheeni comes to Aryan and asks him about Imlie but Malini takes her away from there.

Aryan thinks to himself that he will have to take care of Cheeni from now on and not sulk around for Imlie.

After nine months, Aryan is on a call while Arpita comes there and tells him that Cheeni refuses to eat.

Aryan stands up to go to Cheeni's room when Imlie's anklet falls from his lap.

Arpita asks him if he also believes that Imlie is no more but he leaves without giving her an answer.

On the other hand, Anu asks Malini why she sends Cheeni to the Rathore house every weekend and Malini reveals that it is all a part of her elaborate plan.

Meanwhile, Aryan goes to Cheeni's room and sees the room littered with crumpled drawing papers across the room.

He sits beside her and tells her to show what she has painted and Cheeni shows a drawing of Imlie with missing written on it.

Aryan tells her to understand that Imlie is not missing but she left them as she had taken Cheeni from her mother.

However, Cheeni brushes him off and tells him to help her put the posters around the city.

Aryan takes Cheeni to the city and they start putting up the drawings while he recalls a romantic moment between him and Imlie as she promises him to also communicate with him somehow.

Cheeni prays to Sita Maiya to make Imlie return while Aryan sees it and thinks that Imlie broke her promise to Cheeni also.

Elsewhere, Imlie is lying on a bed while Meethi tells the Vaidji that she got the call from the public hospital two months ago about Imlie and she left everything to take care of her daughter.

Vaidji tells Meethi that Imlie is very much alive and that she can still hear everything but she has lost the will to live.

Meethi sits beside her daughter and holds her hand while saying that God must give her a reason to make Imlie want to live.

Later, Aryan comes to the same place where Imlie is kept and Imlie's fingers start twitching as she opens her eyes slowly.

Meethi sees her daughter responding for the first time and rushes to Vaidji while Aryan sees a lady (Meethi) running as she shouts for Vaidji.

Aryan thinks that it must be some emergency and rushes towards the place where the lady (Meethi) was coming from.

© Copyright tellybest.com, 2020, 2021. All Rights Reserved. Unauthorized use and/or duplication of any material from tellybest.com without written permission is strictly prohibited.
Cached Saved on: Friday 30th of September 2022 07:26:41 PMCached Disp on: Saturday 1st of October 2022 01:48:35 AM