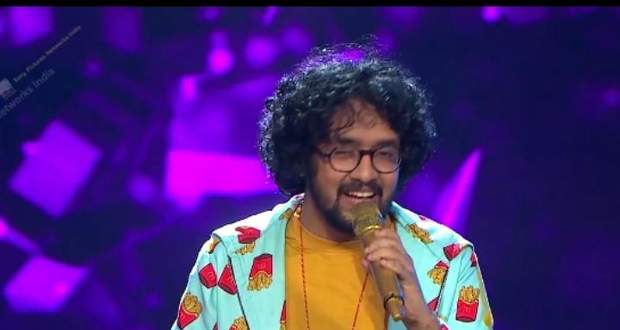 Indian Idol 12 27 June 2021 episode starts with the host announcing that it is Senior Citizens special episode and that the contestants will be singing requested songs from them.

Sayli Kamble sings 'Bahon Mein Chale Aao' by Lata Mangeshkar and leaves the judges in a happy mood due to her singing.

Pawandeep performs the song 'Zindagi Ki Yahi Reet Hai' by Kishore Kumar and gets praised by the judges.

Aashish Kulkarni sings 'Chand Sifarish' by Kailash Kher and Shaan and here praised for his variations.

Mohd. Danish sings 'Yeh Reshmi Zulfen' by Mohammed Rafi upon request and gets praised for his vocals.

Next up is Nihal Tauro who melodiously sings ' Khamoshiyan' by Arijit Singh while the judges sing along with him.

Shanmukhapriya performs the song 'Meraa Naama Chin Chin Chu' by Geeta Dutt and takes the judges back in time.

© Copyright tellybest.com, 2020, 2021. All Rights Reserved. Unauthorized use and/or duplication of any material from tellybest.com without written permission is strictly prohibited.
Cached Saved on: Monday 3rd of October 2022 01:41:25 PMCached Disp on: Friday 7th of October 2022 02:03:19 PM