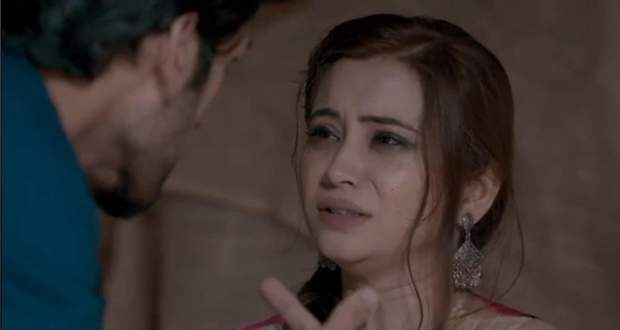 Riddhima questions Siya about the drainage system of the VR mansion. She then goes to the basement to search for Sejal.

Anupriya follows Riddhima to the basement, while Aaryan and his mother hide somewhere behind the wooden blocks.

Riddhima looks for the drainage pipe and finds something suspicious behind the newly built wall in the basement. She decides to break the wall, while Daadi gives a call to Riddhima and she leaves from there.

Daadi informs Riddhima that she has to sit with Vansh in the Hawan. Riddhima starts blushing on thinking about Vansh’s arrival.

Later, Kabir enters the VR mansion disguised as a domestic helper Badrinath. Riddhima thinks to check his Id but Anupriya asks her to help Siya in getting ready.

Later, Aaryan’s mother gives Sejal food to eat, while Sejal drops her wristwatch in the food plate to give a signal of help to Riddhima.

Aaryan questions Sejal about Riddhima’s past relationships. Kabir knocks the door of the basement but finds the door locked from inside.

Aaryan comes out and scolds him for roaming in the house. Aaryan’s mother takes the food plate to the kitchen, while she gets a call from Aaryan and drops the plate by mistake.

Riddhima gets a call from Vansh and asks her the reason for missing him. She then witnesses a watch lying on the floor and realizes that it is Sejal’s watch.

© Copyright tellybest.com, 2018, 2019, 2020. All Rights Reserved. Unauthorized use and/or duplication of this material without written permission from tellybest.com is strictly prohibited.
Cached Saved on: Thursday 3rd of December 2020 07:16:20 PM