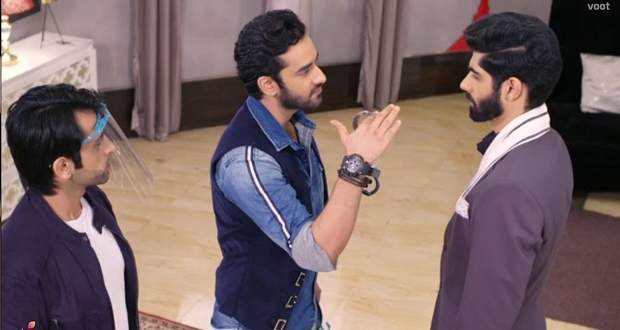 Today's Ishq Mein Marjawan 2 24 Aug episode starts with inspector Kabir arriving at Vansh’s mansion with an arrest warrant against Vansh. Riddhima gets happy to see her lover Kabir in front of her.

Kabir shows a CCTV recording as evidence against Vansh and this makes Riddhima get a victorious smile on her face.

Vansh asks Kabir to show him the recording again and tells Kabir that he is not the one in the video as he doesn’t wear shoes without a specific logo on them.

Kabir tells that he will interrogate everyone present in the mansion and therefore, he starts interrogating Riddhima and acts like he doesn’t know her. Vansh clarifies Kabir that he is not yet proved guilty and Kabir cannot interrogate anyone without any substantial proof.

Vansh’s grandmother gets worried on seeing a police officer in the mansion, while Vansh tries to calm her down. Elsewhere, Riddhima tries to steal Vansh’s gun to prove that he is the one who murdered Ragini’s father.

Vansh arrives there and questions Riddhima about the call she made to Ragini’s father. Riddhima blames Vansh for first killing Ragini and then Ragini’s father. Vansh tries to convince her that he has not killed anyone, whereas Riddhima doesn’t believe him.

Kabir tells Riddhima that he knows about the call made by her to the inspector Kabir.