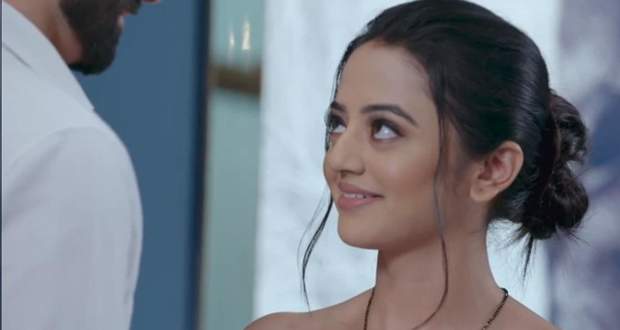 Aaryan tells her that they will surely get a chance to ruin Riddhima and Vansh’s life. Meanwhile, a masked person adds something into the Mehndi to be applied on Riddhima’s hands.

Daadi asks Riddhima to apply Mehndi herself, while Vansh brings food for Riddhima. Daadi asks him to help Riddhima eat through his hands.

Later, Riddhima feels itching in her hands and Vansh asks her to remove it. Elsewhere, Ishani and Amber get into an argument when Ishani removes her Mehndi.

Riddhima gets emotional and shows her hand wounds to Vansh. She feels bad about thinking that Daadi would be upset about not seeing the good colour of Mehndi.

Vansh applies for medicine on Riddhima’s wound and applies sticker Mehndi on her hand. Further, Daadi asks everyone to get good sleep for the Karvachauth festival.

Kabir informs Anupriya about Riddhima’s change of mind and asks her to find the memory card.

Riddhima and Vansh romance with each other and Riddhima think that she should tell him the truth about her past life.

The next morning, Riddhima gives Sargi to Ishani, and Daadi asks her to take blessings from Riddhima.

Anupriya intentionally falls down and Riddhima’s Sargi gets ruined. Ishani feels happy and says that it is a sign of bad luck.

© Copyright tellybest.com, 2018, 2019, 2020. All Rights Reserved. Unauthorized use and/or duplication of this material without written permission from tellybest.com is strictly prohibited.
Cached Saved on: Tuesday 1st of December 2020 01:38:54 PM