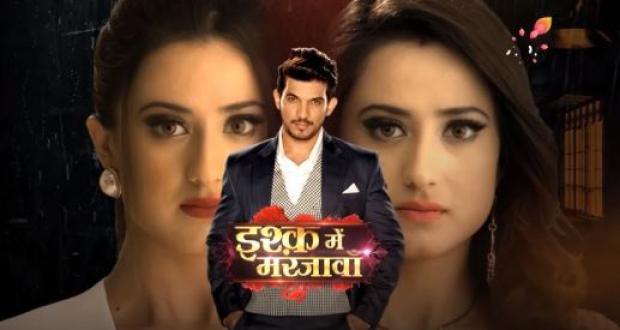 Arohi is scared as Tara even knows that Deep is drinking water. Deep suspects Dany to be the whistleblower and even doubts his wound and starts undressing it. But Chwani stops him and says that he was with her.

Arohi wants to go away as she is feeling unsafe but deep assures her safety with the new guards and even him being there. He says he will make her sleep and tells her that they will go somewhere once all of this is over.

Deep blindfolds Arohi and is taking her somewhere in his arms and Dany stops them to which Deep gets angry. They leave in a car and Dany follows.

Deep and Arohi are stuck in a lift and the light goes off. Deep opens the door and wants Arohi to get out. Once she is out she helps him too but somebody is keeping an eye on them and shuts the lift door but Arohi saves Deep.

Deep then blindfolds her and takes her to a house with Grah Pravesh Kalash waiting for her. Deep says it’s her new small house and nobody can find them over there. Arohi loves the house.

Deep tells Arohi to do havan with him and wants to take seven pheras around it as it was Arohi’s wish to do in solitude. He holds her hand and takes them but feels the pheras are less for the promises he wants to make to her but problems are just around the corner.

Virat kills the house watchman and Tara, Dilip and Roma join him.

Precap: Chwani is struck in the lift and Deep is saving her but Arohi screams Deep’s name to save her too!

© Copyright tellybest.com, 2022, 2023. All Rights Reserved. Unauthorized use and/or duplication of any material from tellybest.com without written permission is strictly prohibited.
Cached Saved on: Wednesday 25th of January 2023 06:26:28 PMCached Disp on: Monday 6th of February 2023 01:06:12 AM