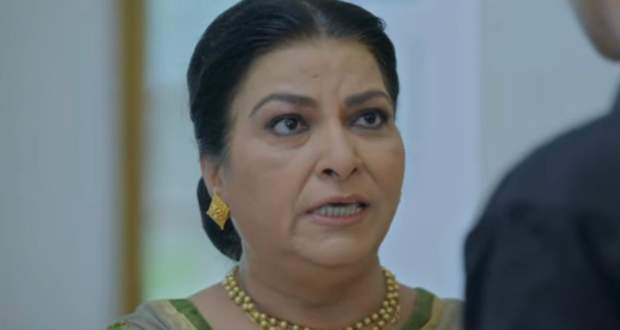 Today's Ishq Par Zor Nahi 13th August 2021 episode starts with Ahaan meeting Rhea and telling her that she can live with him.

On the other hand, Ishqi receives a call from Daadi.

Daadi requests Ishqi to come and meet her once. Ishqi agrees to meet her.

Meanwhile, Ahaan asks Rhea to have a paternity test. He tells her he wants to make sure that he is marrying the right girl.

Ishqi convinces Savitridevi and Maasi that Daadi has accepted her defeat.

Ishqi meets Daadi where Daadi talks about all her mistakes. Daadi tells Ishqi that, she has repeated Savitri's mistake and has to go through everything that Savitri went through.

Meanwhile, the goons kidnap Ishqi and take her to the mental asylum.

Later, Sarla goes to watch the live press conference where Daadi arrives instead of Ishqi.

Daadi tells the reporters that Ishqi was angry about the decision to divorce Ahaan because of which she made a fake announcement on news.

Daadi also avoids the questions of the reporter and leaves the conference.

At the same time, Karthik is confident that something is wrong, which is why Ishqi didn't attend the press conference.

At that moment, Daadi comes back home and tells everyone that Ishqi asked for money for not exposing her in front of the media.

Ahaan asks Daadi about where Ishqi is and Daadi replies that she doesn't know.

In the asylum, the doctors give the injections to Ishqi which makes her fall unconscious.