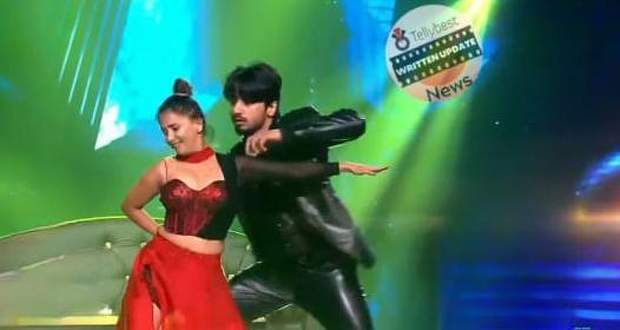 In the latest promo of Jhalak Dikhla Ja 10 (10 September 2022), Manish paul grooves on the retro beats of the early '90s and announces the theme of the week “Retro special”.

In the trending promo of JDJ 10 (10-09-2022), Faizal and Vaishnavi are seen grooving on the floor and performing a contemporary dance wearing 90's red feather dresses.

Meanwhile, Shilpa Shinde is also seen dancing on the floor entertaining the judges with her seductive dance moves.

Today's Jhalak Dikhhla Jaa 10th September 2022 episode starts with Manish Paul announcing the special theme of the week “Life in Retro” while doing a funny dance with all the contestants.

Later on, the judges showcase the golden chair and inform the contestant about the best performance winning immunity and getting a chance to sit on the golden chair with golden stamps shining on their JDJ passports.

Afterwards, Rubina Dilaik with her skipper Sanam performs on the retro song “Lag Ja Gale” doing a sensual dance containing loads of expressions and lifts while depicting a story of a mermaid loving a human.

After the performance, Manish shows a BTS video and tags Rubina as a perfectionist.

Meanwhile, Madhuri compliments Rubina for having great expressions and scores them 10.

Later on, Gunjan and Tejas come to perform on their skipper Sagar choreography on the song “ Aplam Chaplam” showcasing a mind-boggling combination of hip-hop and freestyle with great energy and props like a mask.

After the performance, Madhuri whistles and gives the first golden stamp of the season to Gunjan and Tejas.

Nora, Madhuri and Karan score Gunjan and Tejas’s performance 8 out of 10.

Afterwards, Gashmeer with his skipper Romsha on the song “Badan Pe Sitare Lapete Huye” on the dance style Jaaz while using musical instruments as props.

In the face-off between both teams, Karan refuses to judge and announces a tie.

Both the teams get a score of 8 from all the judges and get golden stamps.

Later on, Shilpa Shinde with her skipper Nishchal puts the stage on fire with their sensual salsa performance on the combination of legendary songs like " Yeh Mera Dil Pyaar Ka Deewana".

After the performance, Karan praises Shilpa for coming out of her comfort zone and Nora compliments Shilpa's flexibility.

All judges give a score of 7 out of 10 to Shilpa and Nishchal.

Later, Manish Paul announces Madhuri Dixit as the best judge of the week.

Afterwards, Paras performs with his skipper Shweta on the song "Bheegi Bheegi Raaton Mein" and depicts a story of two stranger meeting in a cafe with their dancing style tango.

After the performance, Karan assures Paras that he has taken a great step in his career and compliments his discipline and gives him a score of 7.

Both Madhuri and Nora award a 7 to the team.