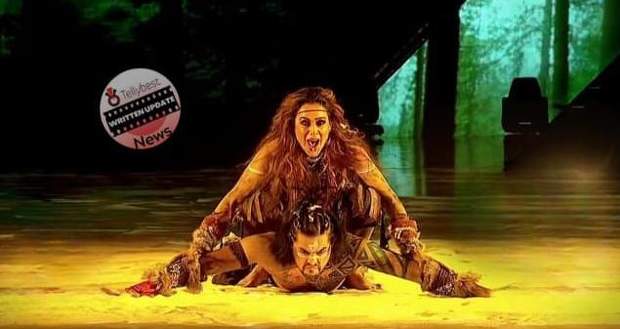 In the latest promo of Jhalak Dikhla Ja 10 (11 September 2022), Nia Sharma and her skipper Tarun dance to the song “Khatouba” and puts the stage on fire with sand and her spicy personality and Nia tells about her mother’s support on her to wear whatever she wants.

The recent promo of Jhalak Dikhhla Jaa 10 (11-09-2022) shows Maniesh Paul entertaining the viewers and contestants with his wittiness and humour amid the dance performances.

The two dance to the retro song 'Ek Haseena Thi' from the blockbuster movie Karz.

As the judges shower Faisu with their compliments and scores, Manish starts pulling Faisu's leg.

Manish reads the DM's from Faisu's phone who messaged him after the proposal by Faisu's sister for Faisu's marriage.

Furthermore, Manish calls Nia Sharma on the stage after a video message by her mother is shown on the set.

Manish calls Nia the nickname 'Rebel girl' who keeps on clashing with the so-called saviors of society.

Nia and her choreographer Tarun dance on the song 'Khatuba' so energetically which receives them a standing ovation from the Bollywood diva Madhuri Dixit.

Not only do the judges shower Nia with beautiful compliments but also give her the stamp on her passport.

Next comes Dadi with her entertaining performance which makes all the judges, contestants, and the audience roll in their seats in laughter.

As the episode moves further, the BTS video is shown where Akash Thapa pranks Niti Taylor by teaming up with his mother which makes everybody laugh at the naughtiness of the young choreographer.

Coming to their performance, the two dance to the retro song 'Aajkal Tere Mere Pyaar Ke Charche', and the audience goes awed at their cute performance.

Manish announces that every week the judges will select a "Sahi Jodi of The Week" and the Jodi which has the more number of coins by the end of the show will be awarded the title of "Sahi Jodi of The JDJ10" and also the coins of the eliminated Jodi will be transferred to the Sahi Jodi of that particular week.

Madhuri Dixit announces Shilpa Shinde and Nishchal as the Sahi Jodi of this week.

Moving further, Dheeraj Dhooper comes onto the Jhalak stage to put it on fire with the sizzling performance of the song 'Bachna Ae Haseeno'.

Dheeraj receives amazing compliments for his performance along with the suggestions.

Also, Dheeraj announces the name of his newly born kid to the audience which is "Zayn" and everyone congratulates him.

With Dheeraj's performance, the weekly performances end for this week and the judges declare the name of the Jodi which gets immunity.

Gashmeer and Roshma get immunity which gives them the chance to sit on the Golden chair this week and secures them from the elimination next week.

The episode is telecasted on the Voot App or Colors TV.