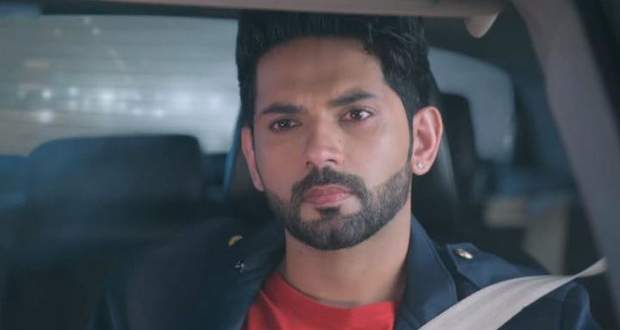 However, Anubhav refuses and tells Gungun about Armaan being her friend first.

On the other hand, Armaan’s driver asks him about his strange quietness while Armaan changes the topic and requests him to drive Gungun home daily from office.

Armaan reaches the airport and starts to go with a heavy heart but sees Gungun and gets shocked.

Seeing Gungun standing with a bouquet of lilies, Armaan's happiness has no bounds and asks her how she’s here in the night.

Gungun informs him about coming from the cab alone and wishes Armaan good luck.

Gungun assures Armaan she will take Jeet Network to a peak.

Meanwhile, Armaan says he’s not sure if he will come after one year and tells Gungun he will not be in contact as his Indian number will be blocked as soon as he reaches the US.

Armaan receives the lilies bouquet with love but returns it to Gungun as he cannot take them through the checking.

Gungun asks Armaan about how he’s so sure about giving her The Chief Editor post.

However, Armaan tells Gungun he thinks a lot but only her face comes to his mind every time.

Armaan announces the need to go now but Gungun holds his hand with eyes full of tears.

Shocked Armaan asks her what happened while Gungun tells about feeling suffocated but with a cracking voice, he assures Gungun.

Armaan leaves her and both turn their backs to each other with tears in their eyes.

At the Kulshrestha’s house, Sunanda urges Anubhav to ask about Gungun's whereabouts.

Gungun gets a call from Anubhav and informs him she will reach home in 20 minutes.

2 years pass by but Kulshreshtha’s family is still the same but a new member is added to the kulshreshtha family.

Meanwhile, Golu teases Charudatt for still looking like a hero in this age.

Chandragupt teases Khushi to also have a child but Khushi tells them to demand their request from Anubhav and Gungun.

Meanwhile, the Kulshreshtha family accuses Anubhav and Gungun of being workaholics.

In Anubhav and Gungun's room, Gungun and Anubhav fight with each other while Anubhav accuses Gungun of not maintaining her personal and professional life separately.

Anubhav accuses Gungun that she has married him, not Jeet Network.