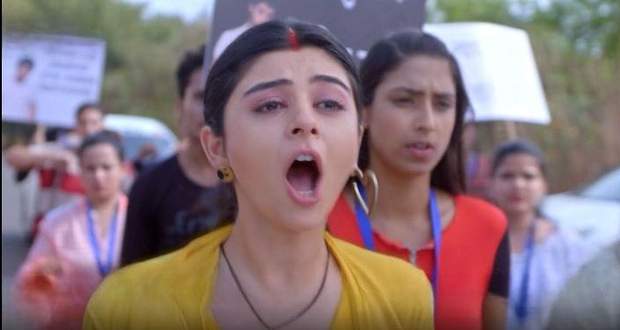 Further, Gungun meets the Commissioner at his office along with Chanchal, Yug, and Ankit.

The police commissioner informs Gungun about the search operation plan while Gungun requests him to take her along with them as the terrorists will definitely try to reach her.

On the other hand, Anubhav gets unconscious while the terrorists plan to wait as there will be a melting point for sure.

The head terrorists appreciate Gungun's will to not give up and take inspiration from her to keep trying to contact Anubhav.

Later, the terrorists discuss escaping the location before dawn and order to do something about Gungun.

The dean prays for Gungun's victory while Gungun says Anubhav's safety is enough for her and she need not get a label or marriage as she knows Anubhav will be separated from her after he gets away from the terrorists.

On the other hand, Akriti watches the TV and says she will not eat anything until Anubhav arrives along with her insecurity about Gungun.

Akriti feels attacked on her marriage more than worrying about her husband Anubhav and says Gungun has Anubhav even though she has all the marriage certificates.

Meanwhile, Gungun refuses to eat anything as she has pledged only to eat after she finds Anubhav.

On the other hand, Akriti stress eats and watches the TV while Chandragupt takes Gungun's side and says she is fighting for Anubhav.

Charudatt gets angry at Chandragupt by calling Gungun fake and reminds him of the night of the pre-wedding party.

Ranvijay gets stressed about Anubhav and Gungun's topic as he was the one behind Anubhav's kidnapping.

Later Gungun leaves in the police car to find Anubhav.

Anubhav gets tortured by the terrorists as they throw water beside him after he asks for water.

Gungun prays for Anubhav's safety and cries in separation.