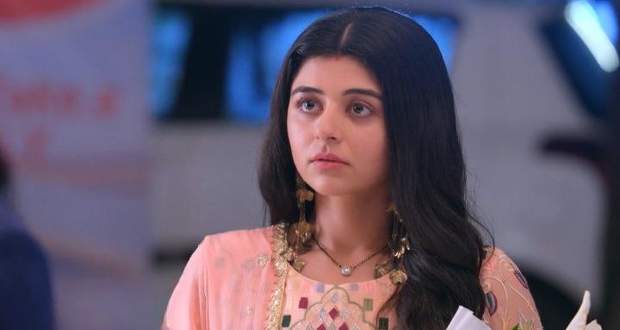 Anubhav replies he’s happy but he wants to start a family with her.

Furious, Gungun denies Anubhav’s request and tells her she cannot waste her two years of hard work and become a housewife in the end.

Gungun declares to Anubhav to foster a child if he wants a child this bad.

Charudatt advises Gungun to make time for Anubhav and the family.

The Kulshreshtha ladies express their concern about Gungun being a good wife, mother and sister while being a good press reporter.

At the same time, Gungun gets a call to inform her that she is nominated for “The World Press Award”.

Gungun takes the blessing of Kulshreshtha's family while Anubhav taunts that she hasn’t won the award yet.

Meanwhile, Gungun accuses the family of thinking that she cannot maintain her personal life well but that is not her fault alone.

Anubhav and Gungun argue in front of everyone while the Kulshreshtha family tries to calm them down and celebrate their anniversary happily.

However, Anubhav and Gungun rush out angrily.

At Jeet Network’s office, the chairman throws a party for Gungun winning the award and calls Anubhav to invite him to the party.

However, Anubhav denies the invitation rudely.

At the same time, an embarrassed Gungun apologises to the chairman on behalf of Anubhav.

Gungun thinks about Charudatt’s advice and starts to think of her symptoms like having high-stress levels, no fixed sleeping schedule and massive headaches.

Gungun decides to consult a doctor because of her high-stress levels.

Meanwhile, Gungun calls Anubhav to tell him about her doctor’s appointment but Anubhav shakes her off as a lie.

Gungun accuses Anubhav of changing after marriage as their love has changed to constant fighting.

At the same time, the Kulshreshtha family throws a party in the house to celebrate the occasion but Anubhav tells them about Gungun’s excuse.

However, the Kulshreshtha family gets furious at Anubhav for letting Gungun go alone to the hospital.

Golu tries to call Gungun but she doesn't receive the call.

© Copyright tellybest.com, 2020, 2021. All Rights Reserved. Unauthorized use and/or duplication of any material from tellybest.com without written permission is strictly prohibited.
Cached Saved on: Sunday 2nd of October 2022 06:55:26 AMCached Disp on: Thursday 6th of October 2022 04:59:45 PM