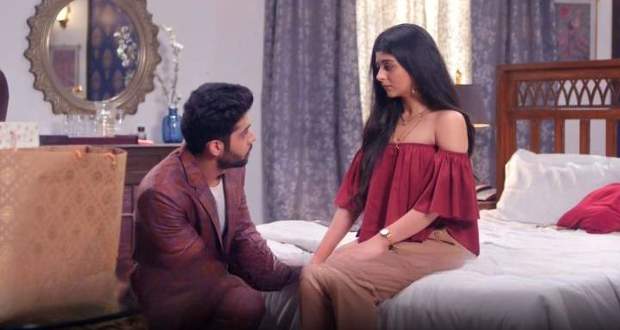 Today's Kabhi Kabhi Ittefaq Sey 11th July 2022 episode starts with Chandragupt convincing Goli to come out of her room which worries Charudatt and the family members.

Akriti starts to lecture and say that Goli will never forgive him but Pradyush says that he is there to clear up all the things and asks to try at least once.

Pradyush tries to convince Goli to open up the door.

Goli blasts Pradyush and says he should stay with his family in America but Pradyush says that he never got married in America.

Pradyush says that he is there to fix his mistakes and misunderstandings.

On the other hand, Gungun and Anubhav enter together at the banquet hall for Anubhav's birthday party.

Gungun introduces Anubhav to the guests and the people who helped her in Mumbai when he was not around.

Further, Anubhav cuts the cake with Gungun and Prakash while a waiter brings a drink mixed with poison to him.

Prakash diverts Anubhav and Anubhav hands out the juice to the student leader as a welcoming gesture.

As soon as Ravi (student leader) takes a sip of the juice he falls to the ground.

Further Goli shows a picture claiming that the woman and the girl are his wife and daughter.

Pradyush explains that the women and the girl are his friend's family and he sponsored them after his friend died.

Trying to explain his love to Goli, Pradyush says that he never got married to anyone.

At Anubhav's birthday party, everyone at the party gets alert after noticing Ravi and call the police.

The police commissioner gets a lead that even the CCTV footage has been stolen which proves that someone professional is behind this murder.

At Kulshresth house, Charudatt asks Pradyush to take an oath in the name of his adopted daughter if he is telling the truth.

© Copyright tellybest.com, 2020, 2021. All Rights Reserved. Unauthorized use and/or duplication of any material from tellybest.com without written permission is strictly prohibited.
Cached Saved on: Saturday 1st of October 2022 12:58:36 AM